The late nineteenth/early twentieth century in Japan was a time when kabuki as an art form was liberalized, becoming more popular than ever. As a result, many communities built their own theaters. By the end of the Meiji Period (1868-1912) there were between four and five thousand such theaters across Japan. Only a few have survived to the present day, including Yachiyo-za, a theater built by the merchants of Yamaga in Kumamoto Prefecture. In 1988 it was designated by the Agency for Cultural Affairs as an “Important Cultural Property.”

Yamaga is located on the banks of the Kikuchi River in a valley with two millenia of history as a major rice production area. The Kikuchi River flows into the Ariake Sea, making it a significant artery for the shipment of rice and other agricultural products. Yamaga was also a post town on the Buzen Kaido, a road between Kumamoto and Kokura that formed part of the system of Japanese “highways” ultimately leading to Tokyo that was developed during Japan’s feudal period. As Japan modernized after feudalism ended, the Buzen Kaido remained in use for shipping and general travel.

As transportation modernized and travelers had greater mobility and more choices about where they might break their journey, the merchants of Yamaga realized that they needed something to entice travelers to make their stopovers in Yamaga. They chose to sponsor the building of the Yachiyo-za Theater, which opened in 1910. It was Kyushu’s first kabuki theater.

The large wooden theater was traditional in its design, with patrons seated on tatami flooring instead of chairs. It had a capacity of 1,274. The main floor was divided into boxes, each seating eight; the floor sloped slightly upward toward the back of the theater. This feature was an innovation introduced because some Japanese who had traveled overseas had observed sloping floors in Western theaters and realized the improved vantage point they provided. The balcony level had seating on three sides and an extra tier of seating at the very back.

Like every kabuki theater, a hanamichi runway bisects the seating on the left-hand side of the theater. This is an extension of the stage and is often used for the actors to make dramatic entrances/exits or to connote movement or travel in the storyline. A noren style of curtain hangs across the door between the lobby and the theater, concealing actors before they make their entrance, but allowing them to observe for their cue.

Apparently kabuki crowds could get rowdy. As a preventative, the theater has its own police box, just inside the hanamichi entrance. From here the local constabulary could monitor the behavior of the audience and quickly address any problems that arose. A set of conduct rules, signed by the Yamaga Police, is also posted just to the right of the stage. 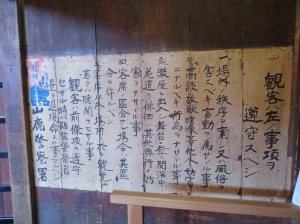 Unfortunately for the theater, entertainment tastes were evolving with the times. Twentieth century people began to prefer movies to kabuki. The theater was adapted to screening movies, with a concrete projection booth (celluloid film was highly flammable, risking fire in the wooden theater). By the 1970s most homes had televisions and even movies fell from popularity. The theater was closed and abandoned.

Like any abandoned building, rot set in. The roof leaked; the building was an eyesore. By the 1980s there was talk of pulling it down. But local groups began a movement to restore the building and preserve it for its historical value.

Thanks to the theater’s designation as an Important Cultural Property, a fund-raising campaign was launched. Contributions came from people and organizations across Japan and restoration work began.  One of the theater’s greatest patrons is the popular kabuki actor Bando Tomasaburo V, who has provided technical advice to ensure that the restoration met kabuki’s exacting standards. He gave one of the earliest performances in the rescued theater in 1990.

Restoration work continued from 1996 to 2001, striving to bring the theater back to its earliest glory.

As much as possible the original woodwork of the building was preserved. Even where floorboards were rotted, only the rot was removed and new wood carefully spliced in to replace it. 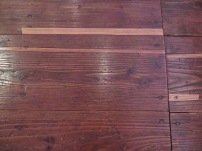 On the main floor of the theater, the boxes were preserved, but bench seats installed, reducing the capacity from eight to four per box. Capacity in the upper levels was similarly reduced so that the theater now holds 650. There is something about the box seating on the main floor that creates a feeling of intimacy with the stage that doesn’t exist with Western-style theater seating. Even the actors comment that they can feel it.

A key feature of traditional kabuki theaters is the revolving stage. Since Yachiyo-za was built before electricity was widely in use, its stage is manually-operated. Usually it takes four men pushing from an underground room beneath the stage. Their job is aided by the way in which the revolving portion has small metal wheels attached and is set on a German-built circular rail. 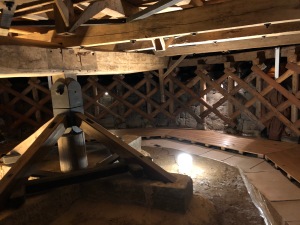 Two other features beneath the theater contribute to kabuki special effects. They are manually operated lifts that allow actors to appear or disappear on stage suddenly. One is immediately behind the revolving portion of the stage and the other is accessed via a trapdoor in the hanamichi. 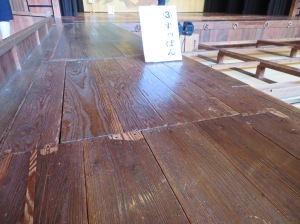 Yachiyo-za’s most unusual feature is its ceiling. It is the only one of its kind in Japan. Each blue ceiling panel features a colorful rosette of advertising. Remember, the original theater was paid for by local merchants and, of course, their goal was to generate business among the theater’s patrons. The ceiling has been restored based on the few photographs of the original theater that have survived.

The gas-lit brass chandelier that originally hung from the center of the ceiling was melted down during World War II. The electric replica is also based on old photographs.

Today the theater hosts not only kabuki but other types of live performances as well. Apparently the theater’s acoustics are particularly kind to jazz singers. Whether you are able to catch a performance at Yachiyo-za or just tour the building, it is well worth the visit.

For true kabuki aficionados, be sure to also visit Yumekogura, the museum associated with Yachiyo-za, chock full of costumes, props and theater equipment. It is located in an 1887 storehouse across the street from the theater and is also where you buy your entry ticket to visit both the theater and the museum (JPY530).

Yachiyo-za is open daily from 9:00 am to 6:00 pm (closed to tourists on the second Wednesday of the month and at New Year’s, as well as on performance days).

© 2021 Jigsaw-japan.com and Vicki L. Beyer
We’re thrilled if you share a link to this page; if you want to re-use in any other way, please request permission.

2 thoughts on “Yachiyo-za Theater: jewel in the crown of Yamaga”