Without the mineral kaolin, fine porcelain could not exist. It is said that Korean potters first found kaolin in Japan near the village of Arita in Saga Prefecture in 1616, launching Japan’s porcelain industry.

These days, 80% of Japan’s kaolin actually comes from the Amakusa Islands of Kumamoto Prefecture, another area known for its pottery and porcelains.  The kaolin of this area is a particularly fine, white stone. When ground and mixed with pottery clay, shaped and fired, it produces fine porcelain that is almost translucent.

Amakusa’s pottery tradition began in the 1760s, after the discovery of kaolin in the area. A local lord, realizing his peasants were unable to survive on farming alone, devised a system of pottery production that could be done on a “part-time” basis in the “off” season.

Initially, the area aimed to produce goods for export to Western countries via the Dutch traders based at nearby Nagasaki. By 1778 the first shipments of export-quality dishes were ready, with styles and designs calculated to appeal to the European market. 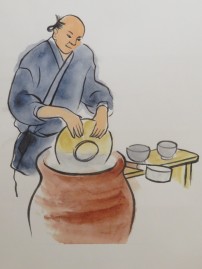 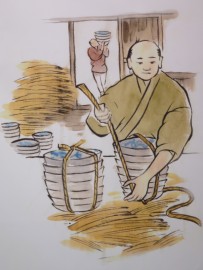 A delightful place to explore this history is the remote village of Takahama on the west coast of Amakusa Shimoshima island (best accessed by private car, although there is a bus service). Here, the Ueda family, prominent merchants, sponsored production facilities and a kiln from the late 1760s. They brought in an experienced potter from Saga to help develop designs and patterns that would appeal to the Western market. 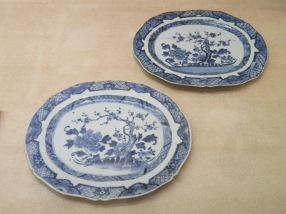 While the styles and designs of the dishes produced were suitable, competition with goods produced in other parts of Kyushu was fierce. After less than a decade, Amakusa potters decided to turn their attentions to the domestic market. 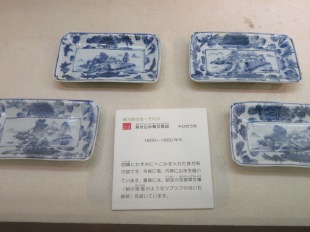 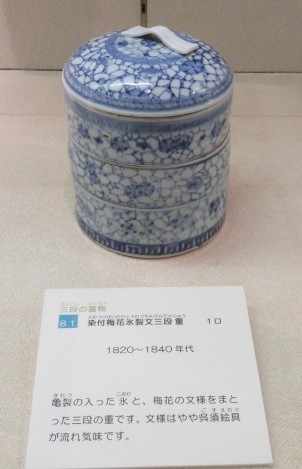 The Ueda History Museum features a number of fine antique pieces, dating back to the 1770s when production for export began. Fine examples of both goods produced for export and the subsequent domestic goods are displayed. An explanation notes that generally the designs of export items were not suitable for Japanese use and vice versa.

The museum is open daily, 9:00-17:00 (admission JPY300), except during the Obon and New Years holidays. It is located on the grounds of the old Ueda family home and garden, a pleasant place to stroll. The Ueda family first built a home on this site in 1658 and parts of the current house date to 1815. 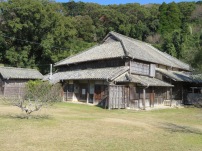 As also happened in other areas, after the Meiji Restoration in the late 19th century, changes to the Japanese economy rendered the kiln’s production economically inefficient and it was closed.  But a small Takahama-yaki kiln re-opened in 1952 next door to the Ueda complex and continues to produce today, using many of the kiln’s historical designs and patterns.  (When the museum is unattended, ask here to gain admission.) 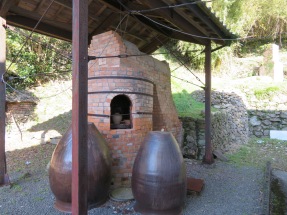 One particularly distinctive motif developed by the earlier Takahama kiln is called Mirumon.  It looks like a clump of coral or a spray of sea weed in blue glaze on the white dish.  Samples of the originals can be seen in the museum, while the modern pieces are available for purchase in the current kiln’s gallery. If you get to Kyushu but can’t get as far as Takahama, these beautiful porcelains are also sold at the Kumamoto Prefectural Traditional Crafts Center. 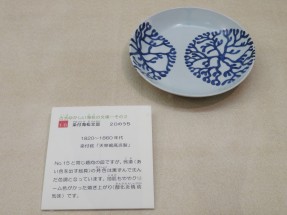 While the original Mirumon dishes were produced in the traditional glaze color, in these modern times, blue is sometimes replaced with yellow or red.  The fine white dishes adorned with just a splash of colorful pattern are translucent and practically glow when held up to light. 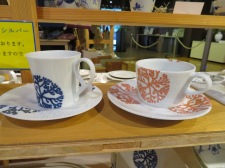 Tiny Takahama is more than just “another” pottery village. In fact, its porcelain legacy is no longer even a major part of its economy. Make your way to the coast to appreciate other aspects of this idyllic spot. 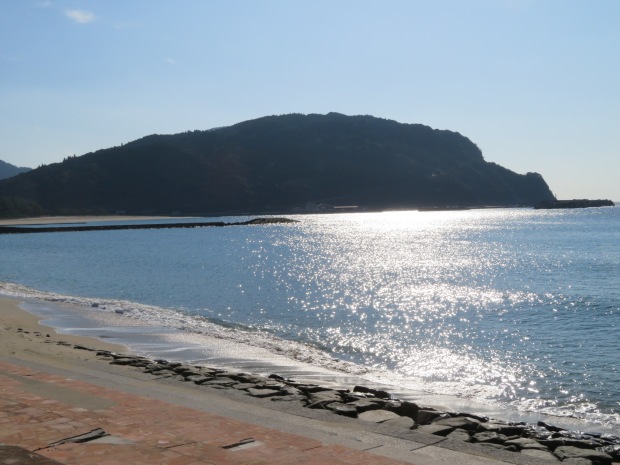 © 2021 Jigsaw-japan.com and Vicki L. Beyer
We’re thrilled if you share a link to this page; if you want to re-use in any other way, please request permission.