Every spring Japan celebrates the pale pink petal of the cherry blossom. And justifiably.

But there is much more to cherries than just the delicate springtime blossom. In early summer, Yamagata Prefecture is popping with the fruit itself, little red balls of sweet juiciness. Further north, in Akita Prefecture, the bark of the mountain cherry, a native tree of the area, has been used in various handicrafts for centuries.

Yamagata produces 70% of all the cherries in Japan. Depending on weather conditions, they are usually harvested from late May to late June.

Even looking out a train window in early summer the fruit, known in Japanese as “sakuranbo”, is visible on trees everywhere. You just want to stick your hand out and pluck! Well, you can…in a way. During the harvest season, lots of orchards offer a pick-and-eat experience–for around JPY1,500 per person, one can wander an orchard for 90 minutes, plucking the luscious fruit from trees and gobbling it down. Here and there, ladders enable pickers to climb to higher branches, where the fruit gets more sun and is usually sweeter. 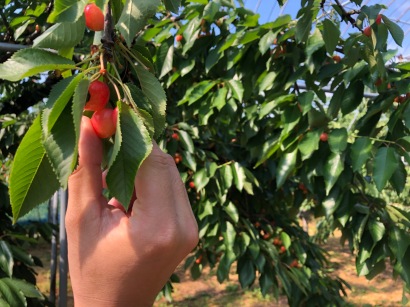 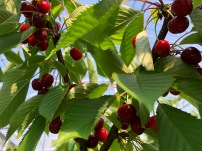 A particularly popular variety seems to be Sato Nishiki, a golden fruit with skin slightly tinged red. Other darker varieties are also grown. One enthusiastic orchardist regaled me with tales of his efforts to hybridize and produce even sweeter fruit. A very subjective taste test indicates that he is achieving a fair amount of success, although he told me he’s yet to name his product and isn’t ready to begin marketing it. 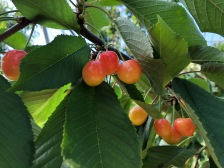 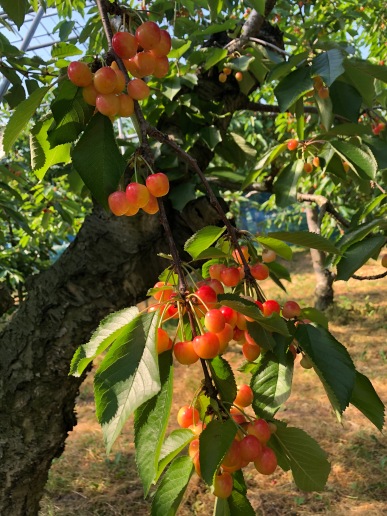 At many orchards, in markets, and even at the local train station, already picked cherries are available for purchase. I ordered some to be delivered to my home. They reached me less than 24 hours after being picked. So yummy! 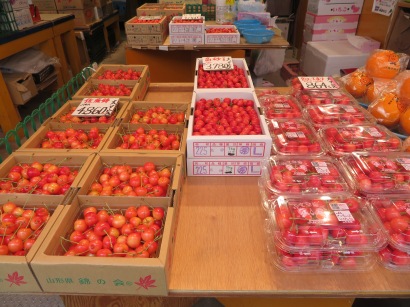 Visitors to Japan often comment on how soft cream ice cream cones featuring local produce or flavors is available across the country. It is no surprise, then, that across Yamagata the most popular flavor of soft cream is cherry. I was so happy to get my cone that I gobbled it down without taking a photo. (Sorry!)

Cherry-infused sake and cherry liqueur (similar to umeshu plum wine, but made with cherries) are other local products hard to find outside Yamagata.

Cherry Bark: the beauty of Kabazaiku

In Akita Prefecture’s historical town of Kakunodate, most famous for its 19th century samurai houses, a traditional handicraft known as kabazaiku is particularly popular. Kabuzaiku is wooden items crafted out of the bark of the wild mountain cherry (yamazakura). Only limited amounts of the bark are harvested, so the trees are left intact to keep growing, also making this a sustainable craft.

At some point in the distant past, someone realized that the wood/bark of the wild mountain cherry had dehumidifying properties, so that any dried goods stored in containers made of cherry bark stayed crisp and fresh. Initially, the containers were used to store kanpo-yaku, traditional herbal medicines, including tea leaves, which were, when first introduced to Japan, regarded as a medicine.

Cherry bark was so effective that its fame soon spread across Japan and even the shogun and the emperor had to have kabazaiku storage containers. Even today kabazaiku tea canisters are highly prized, although many other items are also made of the beautiful material.

Interestingly, some of the most popular objects include both polished and rough cherry bark, or are otherwise rather “rustic” in their design. 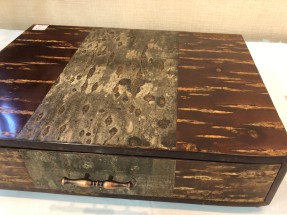 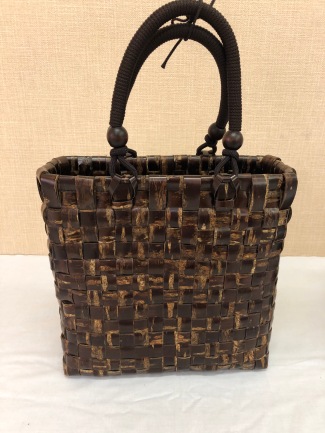 When visiting Kakunodate, one of the best places to see examples of kabazaiku, and even a demonstration of the craft, is at Kabazaiku Denshokan (Cherry Bark Craftwork Museum) in the center of the samurai residential district. Hours: 9:00-17:00 (16:30 Dec-Mar); admission: JPY300.

When thinking of Japan and its famous cherries, don’t forget these wonderful aspects of the beautiful and symbolic trees.