You can feel it in the air, even in Tokyo.  Christmas is coming.

Tokyo gets itself into the Christmas spirit with festive lighting displays on major thoroughfares, shopping centers and tower complexes as well as seasonal decorations in department stores and other public venues.  And from December 16 to 25, Hibiya Park is host to the Tokyo Christmas Market 2016.

Inspired by the traditional Christmas markets that have been a staple of German towns for centuries, this is a festival of food, drink, lights, music, and gift-shopping.  Hibiya Park, one of the oldest public parks in Tokyo, is host to various special events throughout the year, but this is one of its best.  Unfortunately, this means it’s pretty crowded.  But if you take the approach that the crowds just add to the holiday atmosphere, you can really have fun. 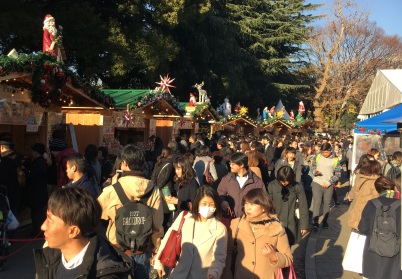 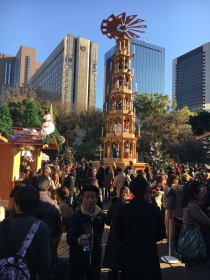 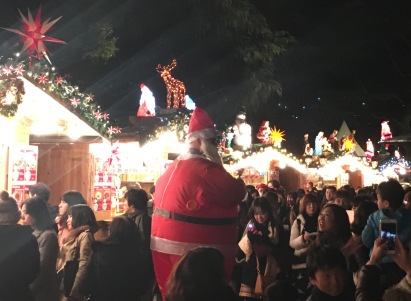 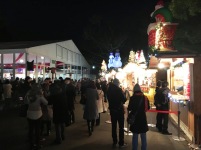 The market is open daily from 11 am to 10 pm, centered around the park’s large fountain.  Perhaps the symbol of the market is its 14 meter “Christmas pyramid”, 6 levels of traditional Christmas themed wooden figures spinning as if powered by candle smoke.  Custom-made and imported from Dresden, Germany, this is a striking work of art that is mesmerizing to watch. 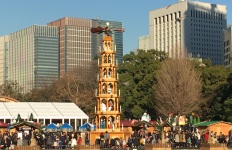 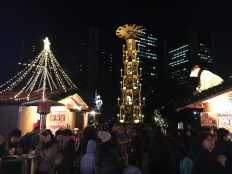 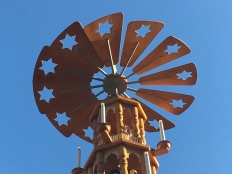 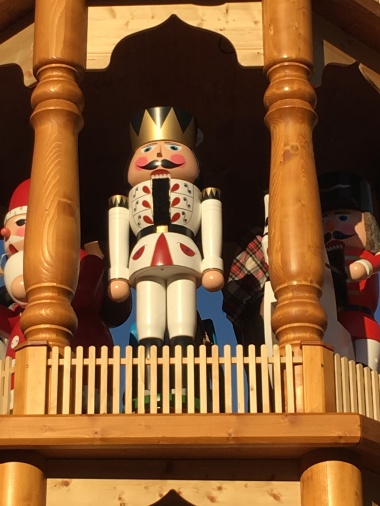 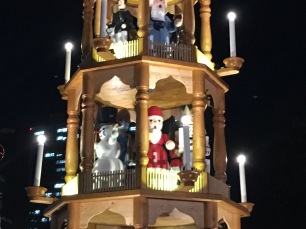 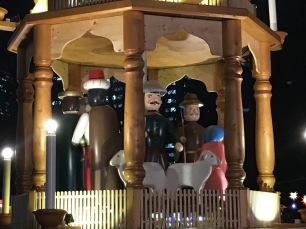 With more than 20 different outlets offering food and drink, as well as a dozen vendors selling seasonal goods and gift items (many imported from Germany) and live music in a covered pavilion, you won’t starve, stay sober, or quickly run out of things to do.

Visit during the day and you’ll observe plenty of families with small children, picnicking on the various kinds of food on offer while surrounded by the various Christmas decorations.  At night, the crowd is made up of friends or workmates enjoying a drink together at the end of the day, and Christmas lights abound. 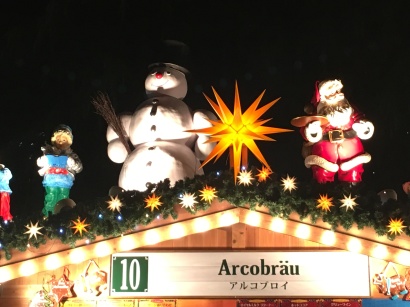 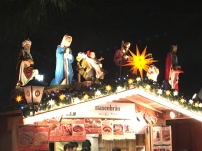 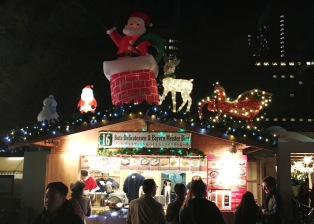 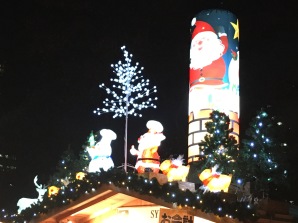 The fare is mostly French-German, with plenty of sausages, roast meats, sauerkraut, potatoes, pate, and pretzels.  But you can also find goulash and other stews, cabbage rolls, quiche and even pizza and its German equivalent, flammkuchen.  If you’re looking for sweets, there are plenty.  Stollen, crepes, fried baumkuchen, apple cinnamon flammkuchen, apfel kuchen, cro-nuts, cheese cake, and strawberry tarts.  It becomes hard to make a selection.  The best strategy is to go with friends and have one save a table while others stand in line for various food items to share among you.  Stollen and some other sweets can also be purchased and wrapped to take home. 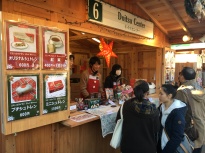 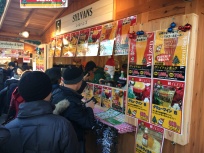 You might expect that the principal drink at a German-inspired festival would be beer.  Certainly several varieties of beer, mostly German, are on tap.  But red and white wine, glühwein (also in red and white varieties at some outlets), coffee, tea and hot cholocate are also available.  Personally, I enjoyed sampling glühwein from several vendors as each used their own recipe.  I struggle to pick a favorite (perhaps more research is required).

The glasses for drinks were handled in an eco-friendly manner.  You pay a JPY1,000 “deposit” on purchasing your first glass and re-use it for subsequent drink purchases.  Both beer glasses and mugs for hot drinks are available this way.  When you finished, you can turn the glass in and retrieve your deposit, or just take the glass/mug home with you as a souvenir. 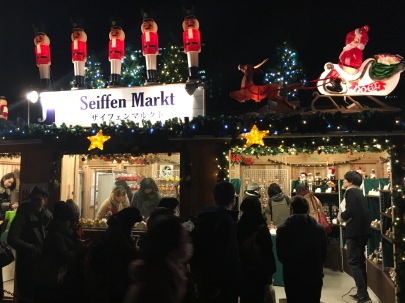 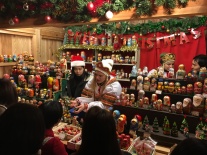 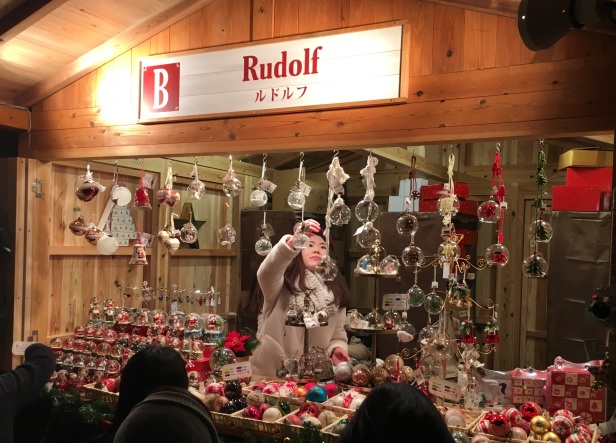 There is also a “workshop” corner with craft activities for kids.  On the day I visited, children were making their own snow globes. 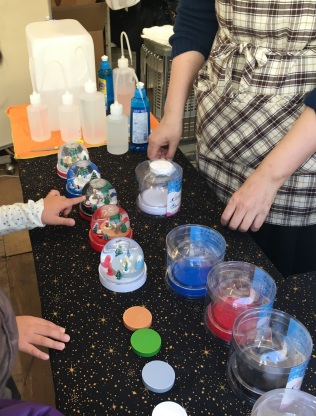 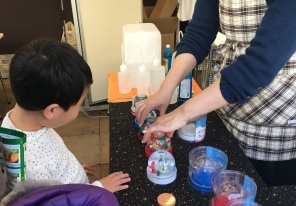 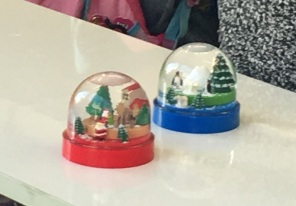 If you’ve had enough of the European flavors and wish for some Japanese “comfort foods”, head to the south end of the park, just beyond the Christmas market.  There you’ll find a small set of booths featuring a few games, Japanese handicraft items, Japanese fair foods (tako-yaki, yaki-soba, okonomiyaki, etc.), and a wide variety of sake available for tasting. 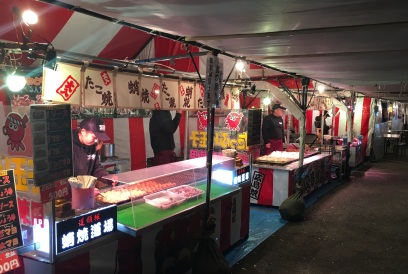 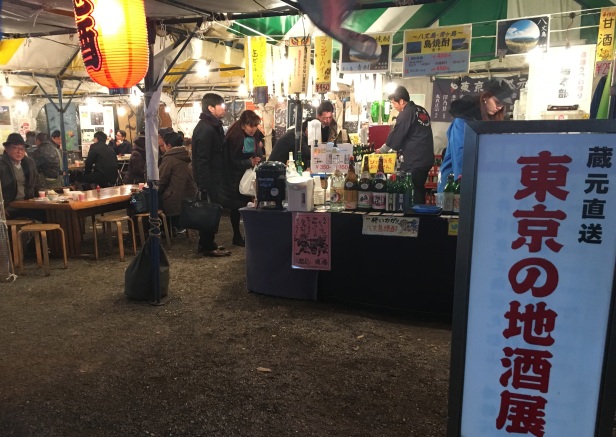 Who knew one could cross half of the globe in just a few paces?  Well, if Santa can make it all the way around the world in a single night, anything is possible.

2 thoughts on “The Tokyo Christmas Market – another Hibiya Park triumph”