Who doesn’t love a good open air market?  And this time of year, German-style Christmas markets are particularly popular in Japan.  The lights, music, and festive atmosphere are great to put one in the mood for Christmas.  Last year I visited the Tokyo Christmas Market at Hibiya Park, which is on again this year through December 25.

To get myself into the Christmas spirit this year, I gave the Christmas Market at Yokohama’s Red Brick Warehouse a try.  This market also runs through December 25.  While it isn’t as large as the one in Hibiya, this market and its neighborhood have a number of features that make it worth exploring.

The Christmas Market is set up between the two Red Brick Warehouses on Yokohama’s waterfront, about a 15 minute stroll from Sakuragicho Station along Kishamichi (the old freight train tracks, now converted to a pedestrian walkway). The Red Brick Warehouses, built in the early 20th century as bonded warehouses for imported goods, now contain chic boutiques and eateries which make them an attraction to be enjoyed year-round. 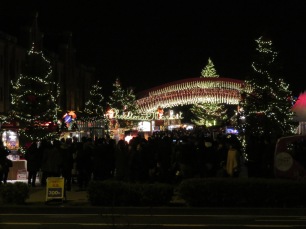 Besides the inviting lights, the first thing the visitor notices is the ice skating rink set up on the right.  Although many skaters were clearly novices–timidly moving along, often with knees locked as they desperately tried to keep their balance and avoid falling–, other skaters speedily zipped through, clearly at home on the ice.  Since I was more likely to fall into the category of the former than the latter, I was happy just to watch the fun. 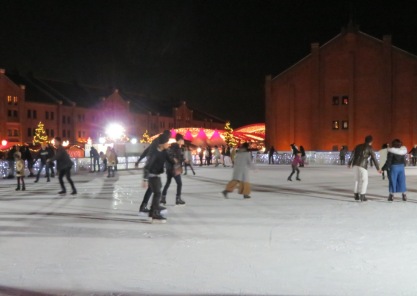 The market itself is a mall of “huts”, most sporting Christmas lights and other decorations of the season. 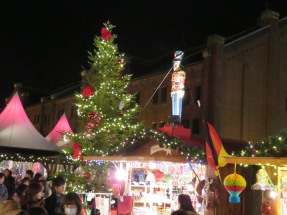 Some of the rooftop decorations were particularly evocative of the season (although I must confess that personally I don’t relate moose to the Christmas season, but this one is kinda cute). 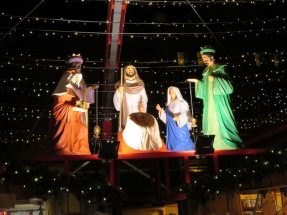 Trinkets and gift items were the dominant features of the huts nearest the entrance to the market, but venturing further in, the huts increasingly offered food and drink, mostly German-style or with Germanic names at any rate.  While beer, glühwein and other beverages can easily be consumed while wandering through the market, enclosed seating made it easy to enjoy one’s food choices. 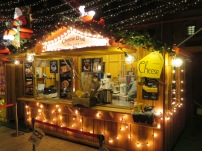 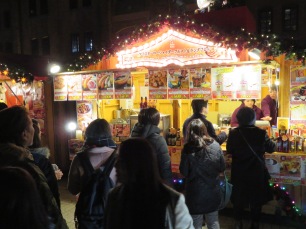 The center of the mall was covered with an arch of fairy lights that added further to the festive atmosphere. 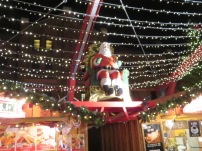 Although there were several decorated Christmas trees at the market, the queen of them all was the 12 meter spruce at the far end, near the waterfront.  Fronted with bells, usually rung by people posing for photos, this tree was a glory.

While this Christmas Market isn’t as large as the one in Hibiya Park, it has additional attractions insofar as one can also continue Christmas shopping inside the Red Brick Warehouses or at World Porters shopping mall nearby.

World Porters and the adjacent amusement park, Cosmo World, are also full of seasonal lights to be enjoyed.  The lights of the Minato Mirai district on one flank of the waterfront further add to the atmosphere.  Cosmo World rides operate until 9 pm, with entry to the  park itself free of charge (ie, you pay only for the rides as you go on them). 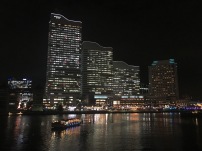 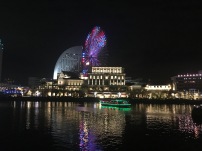 Where the World Porters entrance meets the Kishamichi is a boat dock from which you can catch a 50 minute “Illumination Night Cruises” around the harbor.  Departures are at 16:40, 17:40, 19:00, 20:10 and 21:10.  At just JPY1,500 for adults, this seams a great way to relax and get a different perspective on both the Christmas lights and the lights of the city.

Yes, there’s plenty of Christmas spirit to be found in this corner of Yokohama!

© 2017 Jigsaw-japan.com and Vicki L. Beyer
We’re thrilled if you share this; if you want to re-use in any other way, please request permission.