In traditional Japan there are many rituals observed relating to seeing out the old year and successfully bringing in the new one.  Sometimes these rituals, most of which occur in December, also involve acquiring “lucky charms” of various sorts.

Asakusa, a venerable Tokyo neighbourhood known for its efforts to preserve traditions, is a particularly good spot for this.  From December 17-19, 2017, Asakusa’s Sensoji Temple hosts the Hagoita Ichi (Battedore Fair), offering shoppers hand-made hagoita and various other amulets and trinkets good for attracting luck in the new year.

Hagoita are the Japanese equivalent of a badminton racket; they are the essence of an old Japanese game called Hanetsuki which is commonly played by girls during the New Year’s holiday.  The game is essentially “keep it up”, in which player try to keep the feathered shuttlecock in the air.

From around the 17th century, it has been popular to decorate hagoita with images from kabuki plays and keep them inside the home for good luck, and especially to ward off illness, making them a natural “lucky charm” for this season. Originally, the decorations were just painted onto the hagoita, then cloth coverings were used and today, the most elaborate hagoita are adorned with three-dimensional dolls. 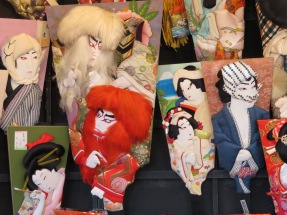 At Asakusa’s Hagoita Ichi there are around 30 stalls selling hagoita of various sizes ranging in price from JPY1,000 to JPY1,000,000.  Most, especially the more expensive ones, are locally hand-crafted, a process that can take as long as a couple of months for the larger, more complex, models. 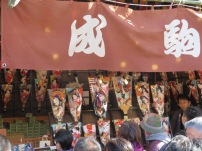 Shuttlecocks, traditionally made with soapberry seeds as the weight, adorned with colored feathers to give it lift, are also on sale, in case one is serious about attempting the game. 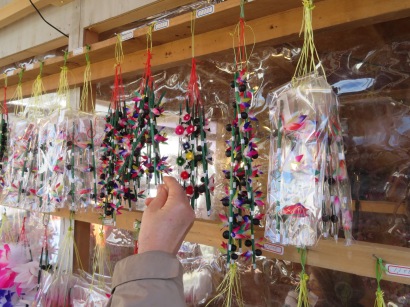 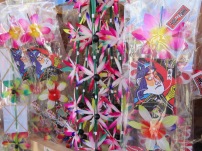 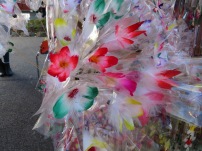 In addition to the traditional images of kabuki characters, more modern renditions may feature current actors, athletes or television personalities. 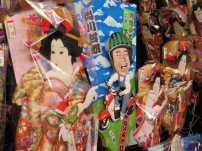 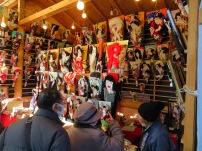 One booth featured hagoita produced by students of Tokyo University of the Arts in collaboration with traditional hagoita makers.  As you would expect, they were “artsy” and contained a number of unique images.

If a personalized hagoita is your desire, there are a couple of options.  One is to have your own caricature drawn onto a hagoita board. 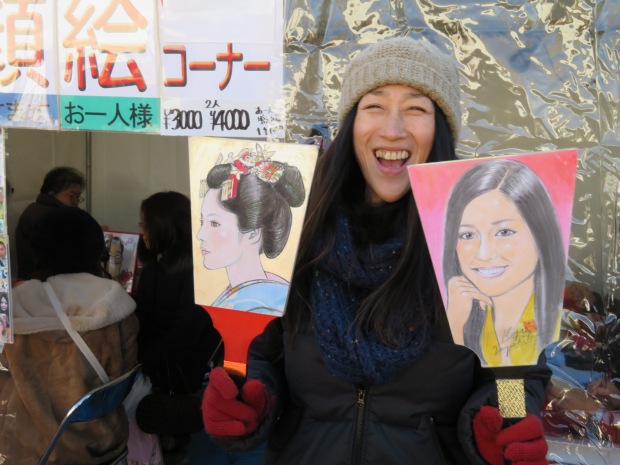 Or, make an imprint of your own hand on a hagoita board and have an inscription written over it in the style of pilgrimage go-shuin.  (This one seems particularly popular, with a long line of customers waiting.) 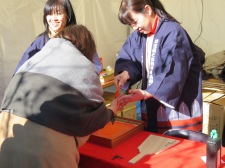 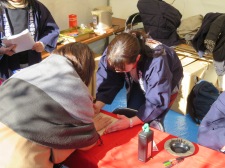 In addition to hagoita, lots of other new year’s items are also on sale at the market. 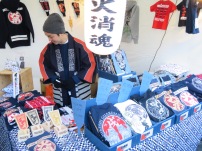 Some hagoita, and other items too, have a canine motif, in honor of the upcoming Chinese zodiac Year of the Dog. 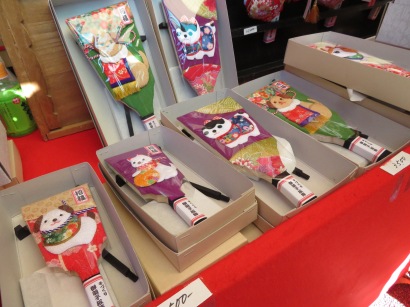 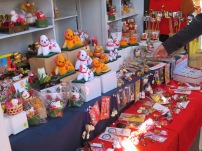 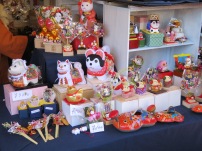 And in an homage to the free “Panda Bus” that carries tourists around the Asakusa district, there are also hagoita decorated with pandas. 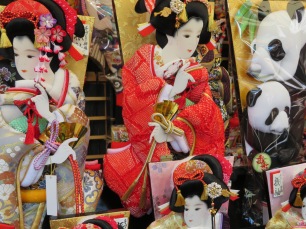 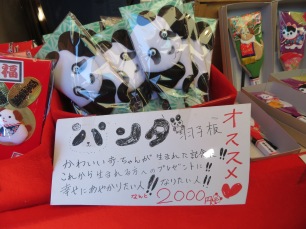 Some purchasers of hagoita are sent on their way with a small clapping ceremony.  The vendors and the purchasers together clap in rhythm:  3-3-3-1, 3-3-3-1, 3-3-3-1, with a whoop after each cycle to help keep the rhythm.  While for some markets there is a religious purpose to the clapping (in effect, activating the juju of the amulet), according to the merchant I spoke with, at the Asakusa Hagoita Ichi, it is a special thank you from the vendors when the purchaser gives them a small tip (couched as money to buy themselves a cup of coffee), so it is only done for those purchasers, not universally. 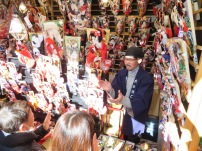 Having just recently learned how shibori fabrics are produced, I was particularly drawn to the hagoita featuring female figures dressed in shibori kimono.

Unlike most Japanese lucky charms that expire after a prescribed period, hagoita bring good health and ward off evil forever, so long as you keep them out and on display.  Although she was selling little wooden stands for her hagoita, one merchant told me that people used to put hooks on them and hang them on their walls as permanent decorations (“almost like foreigners do with Japanese items these days”).  She stressed that this is the best thing to do with a hagoita.

The Asakusa Hagoita Ichi ends on Tuesday evening, December 19, so you need to be quick to experience it.  To be honest, the atmosphere after dark, when the vivid colors of the hagoita are intensified by the limited light, make evenings the best time to go.

© 2017 Jigsaw-japan.com and Vicki L. Beyer
We’re thrilled if you share this; if you want to re-use in any other way, please request permission.