It is a few seconds past midnight.  The temple bell rings once, its low sonorous tone echoing across the heads of the people in the crowd gathered at the foot of the belfry.  The priest who had rung the bell steps out of the belfry, bows to the crowd and says “akemashite omedeto gozaimasu” (happy new year).  The crowd answer him back with the same greeting and then turn to greet each other in the same way.  The new year, 2017, has begun.

As the priest descends from the belfry, an acolyte begins to read out names and people step from the crowd when they hear their names called.  They climb the stairs, sometimes an individual, sometimes a family unit or a couple.  Each representative of a name rings the bell once.  There are 108 names called, one ring from each.  They are ringing out the 108 sins of humankind.  (Presumably they have paid for the privilege.) 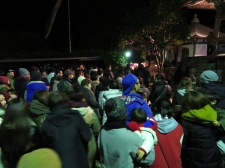 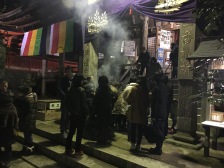 I am at Nachi-san Seiganto-ji, a temple on the flanks of Mt. Nachi in Wakayama Prefecture within sight of the Nachi Falls, Japan’s tallest unbroken drop of waterfall.

While the crowd is lining up, I decide to wander next door to the adjacent shrine.  This is Kumano Nachi Taisha, one of the Kumano Sanzan, three major shrines that form part of a pilgrimage trek known as the Kumano Kodo, which holds a UNESCO World Heritage listing as the “Sacred Sites and Pilgrimage Routes of the Kii Mountain Range”.

Kumano Nachi Taisha was founded as a Shinto shrine in 317AD, so 2017 marks its 1,700th anniversary.  Consequently, in addition to the usual crowd who have come to greet the gods (there are 12 associated with all three Kumano Sanzan shrines) as early as possible in the new year, there is a separate group who have been admitted into the shrine’s inner sanctum for a special worship service with prayers by Shinto priests and dances by shrine maidens to commemorate this special anniversary year.

As interesting as the special service is–I peeked into a window–it is the crowd of “ordinary” worshipers who are most interesting to me.  They line up three abreast and quietly wait their turn to ring the bell, bow twice, clap twice and then say their prayer over a bowed head.  When finished, they purchase amulets and other lucky charms, greet their friends and neighbors who also happen to be there, and pose for pictures.  It is a solemn but happy occasion. 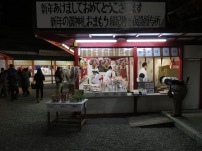 The shrine and the temple were once a single unit, but were forced to separate in the mid-19th century by the Meiji government, which was anxious that Shinto, with its strong affiliations to the emperor, should be Japan’s predominant religion.  Many temples were forced to close completely at that time and their art treasures were destroyed, but the associations between shrine and temple here in Kumano were so close that they were able to continue to co-exist successfully.

After wandering back over to the temple side of the complex, I admired the view of the floodlit three story pagoda, with the equally floodlit Nachi Falls behind it.  The servers at my inn told me that tonight is the only night of the year when both are floodlit; I am lucky to be here for the occasion. 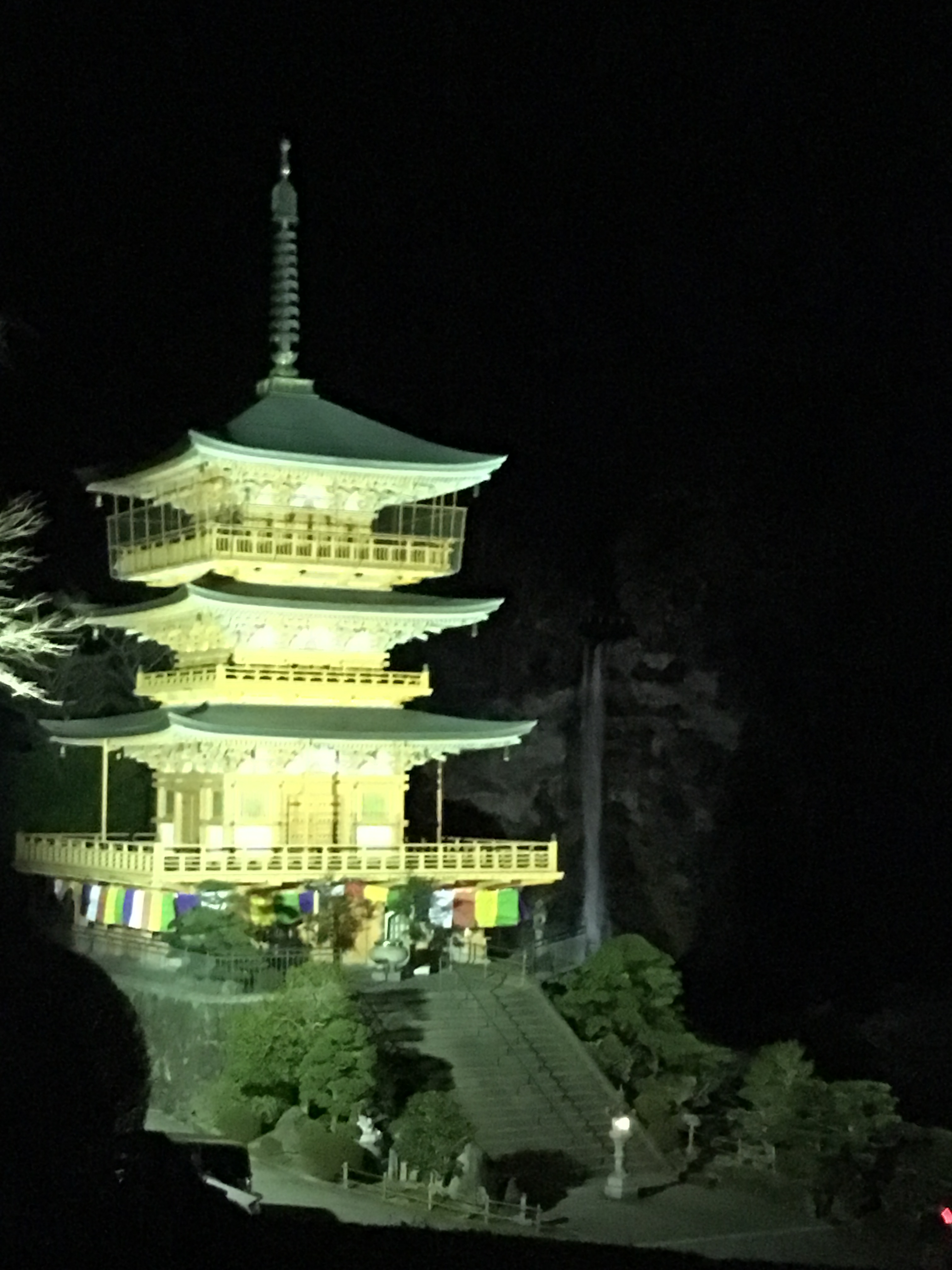 Aided by the flashlight on my smartphone, I make my way down otherwise unlit ancient stone steps leading to the foot of the falls, where there is another guardian shrine.  From the official entrance to the shrine precincts the stairs are also floodlit, making my descent more assured.

There aren’t as many people here as there were above, but I can see the remnants of the special blessing service the priests must have just completed.  The sound of the pounding water, and the view, are awe-inspiring. 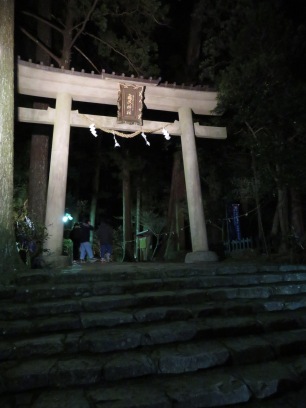 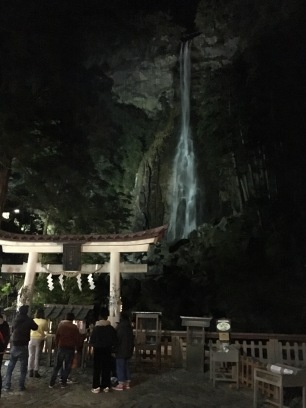 Now that I have paid my respects at the religious sites of this mountainside, I happily stroll back to my inn to get some sleep.  It has been a magical midnight experience to feel the spirit of the new year here at Mt. Nachi.

After breakfast we drive down the mountain and up a separate valley to reach Kumano Hongu Taisha, often regarded as the principal shrine of the three Kumano Sanzan shrines, and the first one reached by pilgrims of old making their way on foot from Kyoto.  While not as ancient as Kumano Nachi Taisha, Kumano Hongu Taisha has more than 1,000 years of history…and two locations.

The original shrine was located at a place known as Oyunohara, the confluence of two rivers.  Needless to say, this location was prone to flooding and in 1889 the flood devastation was so complete that it was decided to relocate the shrine to the banks of the Kumano River above the spot where it is joined by the Otonashi River.  So, technically, this “new” location is the site of the shrine, a stunning complex of traditionally-designed shrine buildings roofed with thick cypress shingles.

But the old location still contains the foundations of the original shrines and some small stone shrines have been erected to house four of the original 12 gods.  The entrance to the Oyunohara is also marked by the largest torii shrine gate in Japan.  While the official shrine was much more crowded with worshipers seeking to make their new year’s prayers, Oyunohara also saw its share of visitors. 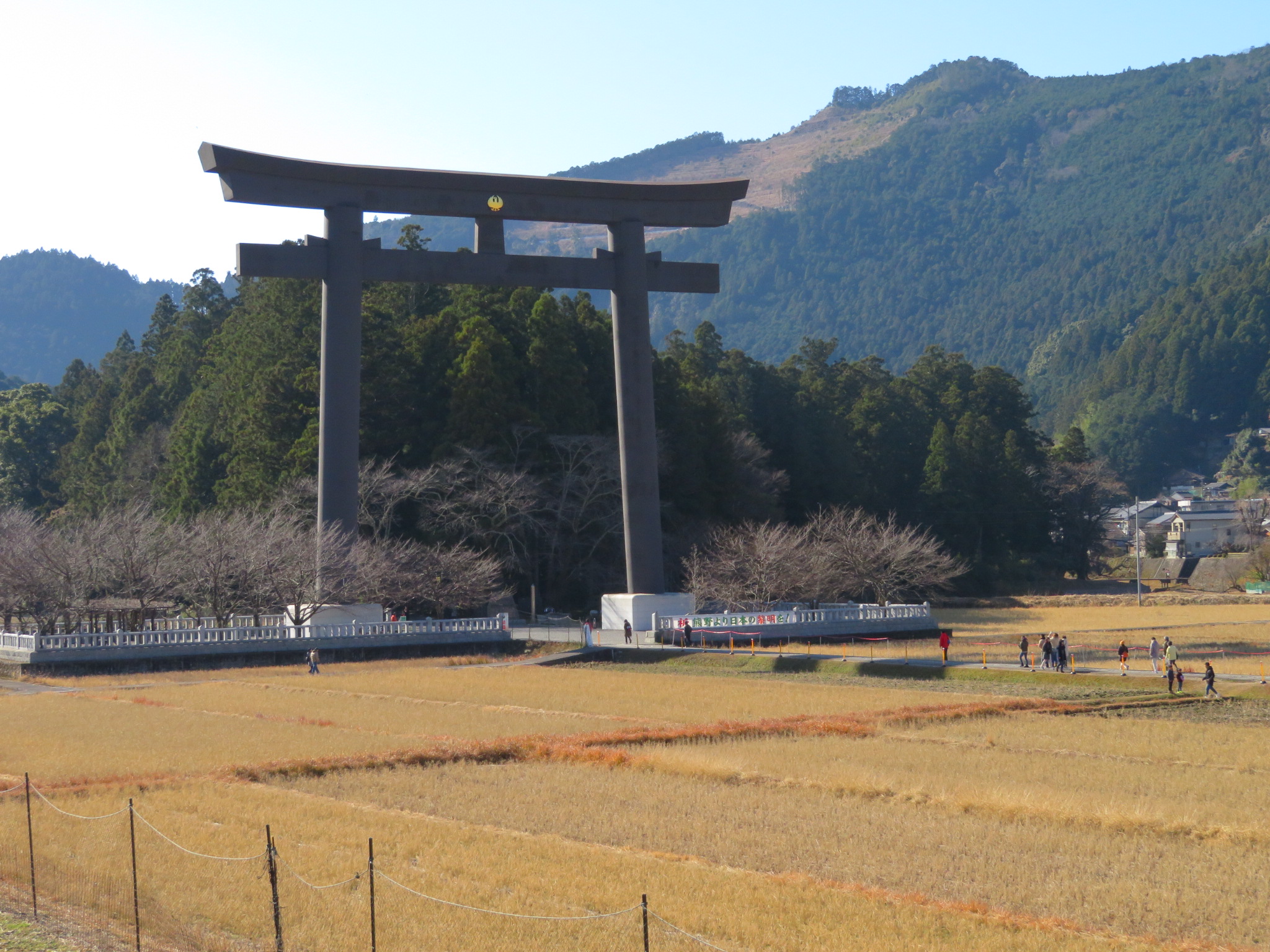 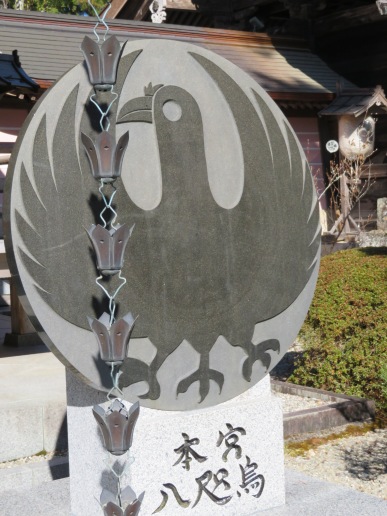 After worshipping at Kumano Hongu Taisha, traditional pilgrims (those who arrived by foot via the Kumano Kodo from Kyoto) often boarded boats that carried them down the Kumano River to the town of Shingu, the site of Kumano Hayatama Taisha, the third of the Kumano Sanzan shrines.  We said our prayers, bought amulets and drank a cup of ama-zake, and then made the 35 kilometer trip downriver by car.  The road followed the course of the Kumano River, allowing us to enjoy its emerald green waters and the beautiful mountain scenery on its banks.

Kumano Hayatama Taisha sits near the mouth of the Kumano River.  It is a descendant of an earlier shrine, Kamikura Jinja, located at the foot of nearby Mt. Gongen.  This shrine is dedicated to a massive boulder that sits, somewhat precariously, halfway up the mountain.  Alas, I didn’t realize how far up the mountainside I would have to climb on rugged stone steps to reach it.  But it was well worth the climb!

Fortunately for my tired knees, Kumano Hayatama Taisha itself is located in a flat area on the riverside, making it the easiest of the three Kumano Sanzan to visit.  Even though it was nearly sunset by the time I reached it, the shrine grounds were still buzzing with people offering prayers, buying amulets and fortunes.  One particularly noticeable feature of this shrine was the racks on which people tied their fortunes after reading them.

Hopefully my midnight worship and subsequent mini-pilgrimage (albeit with the aid of an automobile) will have me well-placed for a prosperous and successful 2017.  What more could I wish for, except to wish the same for you.

One thought on “Magic at midnight: Seeing in the new year Japanese style”