I ease my freshly scrubbed self into the hotel’s large bath.  It’s very hot, but not so hot that I am unable to sit myself down.  I immerse up to my chin, close my eyes and sigh.  La dolce far niente!  Although I’m not in Italy, this is the phrase that runs through my mind as I indulge in this wonderful bath.

I’m in Kusatsu, an onsen (hot springs) town in the Japanese Alps of northwestern Gumma Prefecture, a few hours northwest of Tokyo.  Because of the healing mineral properties of the onsen water here, not to mention its extreme heat (between 45C and 90C at the source), this is said to be one of the best, if not the best, onsen in all of Japan.  As I soak and enjoy the solitude (although I am in the ladies bath of a large hotel, somehow I am in here alone), I am inclined to agree.

When I finally feel I’ve soaked long enough, I step out and return to my “bathing station”, one of a row of spigots in the wall at about my knee height, with a low plastic stool and plastic basin on the floor in front of it.  This is where I had washed before entering the bath to soak.  Now I fill the basin with water that is warm but still cooler than that in the bath, and pour it over myself to rinse off.  I soap up and wash once more, just for the fun of it.  Then I walk over to the side door leading to the rotenburo, or outdoor bath.

Although I’m warm from the bath, I brace myself for cold air.  The last time I checked the outdoor temperature, it was -6C, and that was at about sunset.  It’s surely much colder now!

In fact, I don’t really feel the cold air when I step out.  Instead, I am overwhelmed by the steam.  I seem to have stepped into a cloud and I cannot see a thing!  I inch forward along flagstones that I’m confident will lead me to the bath.  When I find it, I slip in.  I can hear a little splashing not far away.  I quickly realize that my would-be bathing companion is actually getting out of the bath.  It was her activity that had resulted in the steam cloud.

As I sit quietly in the bath, the steam dissipates somewhat; never entirely, of course, given the below-freezing air temperature.  I can make out the edges of the stone bath and the little garden that surrounds it–a stone lantern, a boulder, some well-trimmed shrubbery, all topped with snow.  Steam rises from the water and floats above it on a gentle breeze.  The volume of steam increases when I move about and disturb the water, then it settles again.  It is mesmerizing to watch.  My cares and worries seem to be carried away with the steam, as my relaxation deepens.

Eventually I get out and return to the main bath to repeat my rinse, wash and soak routine.  Now a young mother is busily scrubbing her two young sons and settling them into the bath–well, as much as small boys will settle.  In spite of the heat of the bath, they splash and play as if they are in a regular swimming pool.  At my end of the bath, again immersed to my chin, I watch and marvel.

When I finally decide I’ve bathed long enough, I perform one final rinse and return to the dressing room to towel off and put on the cotton yukata robe provided by the hotel.  I’m now so well relaxed that once back in my room I fall asleep almost as soon as my head hits the pillow.

It’s not that I’d had such a busy day.  Mostly I’d just wandered around the town of Kusatsu enjoying the atmosphere of the town.  Onsen water seemed to be flowing everywhere, permeating the entire town with steam and a slight sulfur smell that is initially a bit off-putting (but I quickly became accustomed to it).

Both the extremely high temperature of the water and its mineral content are thanks to Mt. Shirane, a nearby active volcano.  The water is highly acidic, containing sulfur, aluminum, sulfate and chloride, elements picked up as the water moved through the volcanic rock of the mountain.  This all sounds quite poisonous, but in fact it results in therapeutic qualities to treat a number of skin diseases as well as rheumatism, heart disease, diabetes, and chronic women’s diseases.

In the town’s central square, known as yubatake (hot water field), 4,000 liters of onsen water per minute are directed through half a dozen sluice boxes, both to cool it and to harvest the mineral salts from the water.  The salts are then packaged and sold to those who would turn their home bathtubs into mineral baths.

The quality of the waters here have been recognized for centuries (if not millenia).  There is a local legend that Minamoto Yoritomo bathed here in 1193; in 1595 Toyotomi Hideyoshi wrote to his colleague (and eventual Shogun of Japan), Tokugawa Ieyasu, to recommend the waters of Kusatsu.  In the early 18th century, one of Tokugawa’s descendants had Kusatsu water barrelled and brought to Edo so that his son, who suffered from a skin ailment, could be treated by bathing in the curative water.  In the 19th century, there were also attempts to use Kusatsu’s waters as a treatment for leprosy.

The beautiful blue-green water and the steam emitted as the water moved through the sluice boxes made for a very exotic atmosphere.  In spite of the low temperature, I didn’t feel particularly cold.  I even took a little break to join my fellow tourists in the foot bath that sits in the square overlooking the yubatake. 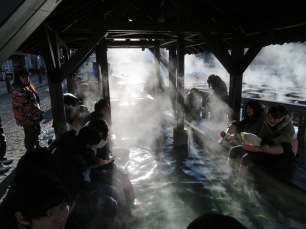 In the morning, I awaken wondering if the idyll of the previous day had been just a dream.  I consider having another soak in the hotel’s bath before breakfast, but decide to wait until after breakfast and try one of the town’s many public baths instead.  I wander through more of the narrow alleys of the town and up a small valley called Sai-no-Kawara Park, one of the many areas where the onsen water pushes its way to the rocky surface and then gathers into the streams that flow through the town. 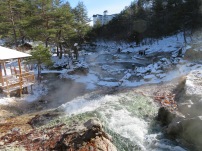 At the top of the park is the Sai-no-Kawara Outdoor Bath, where, for JPY600, I bathe and soak again, this time surrounded by mountains, snow, sunshine and blue sky.  To me, this is the best kind of bath, but I have to admit that there are so many other baths to explore at Kusatsu that I cannot be definitive on that point.  The fact is that after this much bathing I am already too relaxed and enjoying la dolce far niente too much to do any further research!