It all started in the middle of the 9th century.  Summer was always the season for increased disasters:  illness, floods, and devastating fires.  So the emperor ordered people to offer prayers for relief at Yasaka Shrine in Kyoto’s Gion district.

Before long, the prayers were being offered with such regularity that the people made an annual festival out of it:  the Gion Matsuri.  It’s been held (with a few minor interruptions) for ten and a half centuries.

Huge floats were developed by various neighborhoods of the city and paraded through the city each year in mid-July.  In modern Kyoto, the entire month of July is given over to events related to the Gion Matsuri.

This year the parades are being held on July 17 and July 24, with the 3 days before each parade being particularly festive.  The floats, together with massive racks of chochin paper lanterns, are on display on main streets and side streets throughout the heart of Kyoto.

The side streets effectively become a massive street party, as visitors stroll the streets viewing the floats and other exhibitions but also buying and consuming food and drink at various restaurants, shops, and temporary stalls set up on the streets. 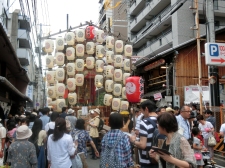 While the floats are on display, many are also open to visitors, or occupied by local volunteers dressed in festival gear (yukata or hapi), playing traditional festival music.

There are two types of floats:  hoko and yama.

Hoko floats are relatively smaller, weighing 1 to 1.5 tons and topped with images of famous people or historical scenes.  One particularly popular float is topped with a mechanized praying mantis. 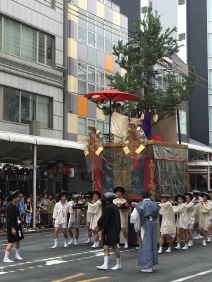 Yama floats are massive–2-3 stories tall, weighing up to 13 tons and topped with a tall pole.  They roll on four wheels with fixed axles that make cornering a particular difficulty.  (Well, truth be told, given that the floats are not mechanized, but rather pulled along by 30-40 men using huge ropes, anything about moving them is difficult.)  To turn the floats, they are slowly rolled onto overlapping bamboo screens and then, on signal, the men on the ropes give a mighty tug, causing the front wheels of the float to slide on the bamboo screens.  The maneuver usually has to be repeated to effect a 90 degree turn.

One of the most popular yama floats is shaped like a ship.  Badly damaged and out of circulation for a while, it has been beautifully restored and is now back in the festival. 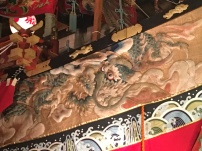 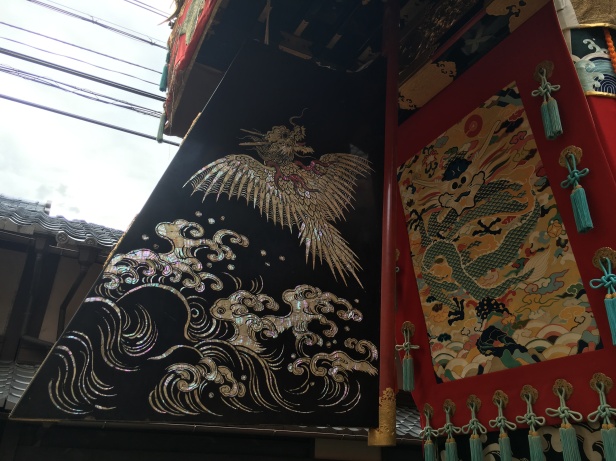 Between the floats and the participants, the parade is a true highlight of the festival.  According to legend, in 1533 the Ashikaga shogunate tried to ban all religious rituals but the locals insisted on being allowed their parade, even if the religious aspect were exorcised.  It’s easy to understand why they wanted to keep up the tradition.

And we can all be grateful that they did!