On a recent visit to Kanazawa, I decided to ride a Machi Nori bicycle from the train station over to Higashi Chaya, one of Kanazawa’s historical tea house districts.  My route took me along the lovely Asanogawa, one of two rivers flanking the heart of the old city.  It was a beautiful morning and I was in no hurry, stopping to chat with a cafe owner and some school girls along the way.

As I pedaled along, I noticed ahead of me some persimmon fruit and a few branches lying on the riverside path.  Atop the adjacent retaining wall I could see a man trimming trees.  I called out to him, “Would you like me to throw these fruit back to you?”  He looked over, a bit surprised, but quickly assented and I tossed up a couple of the fruit.  He told me I could keep a few of them if I wanted and then, to my surprise, said “Why don’t you come up for a bit? This 100 year old house is a restaurant; I’d love to show you around.”

Now it was my turn to quickly assent and my new friend pointed out a short cut route to the top of the retaining wall, some two or three stories above the riverside path.

On the street above, I found myself in a residential area, but soon saw a lovely traditional gate with a very discreet sign identifying the restaurant, “Mon”.  On either side of the gate were small mounds of purifying salt, common at the entrance of traditional commercial establishments. 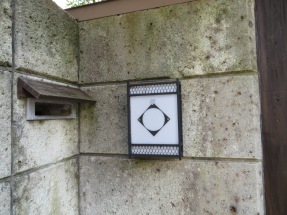 I was soon met by Kishi-san, the man I had been speaking to earlier.  He explained that the house was over 100 years old and had been his family’s home since the 1940s.  He also explained that since his children had grown up and left home, it was just him and his wife and since they don’t need such a large house, when he was approached a few years ago about possibly renting the house to a restaurateur, he was happy to do so.  (He and his wife live next door.)

Since it was only mid-morning, the restaurant wasn’t open yet, but Kishi-san had a quick word with the chef, who was setting up for the day, and we were permitted to enter so that Kishi-san could show me around.  The entry hall is a kind of gallery, lined with shelves containing small porcelain and pottery dishes available for purchase.  Apparently they are sourced from across the country, and are popular with diners as mementos of their dining experience here.  They were very reasonably priced and it would be easy to make an impulse purchase. 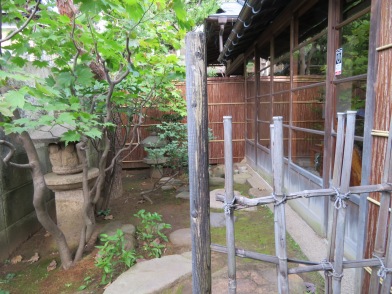 Kishi-san explained to me that they had just installed the glass doors in preparation for the winter season.  He also explained that in summer they use doors with reed panels that function like screens to let in breezes while keeping out insects.  Both are very practical for this climate, yet fewer and fewer people are using the reed panels these days because of the bother.  Apparently these items are swapped out seasonally in accordance with a rather strict calendar.  While that sometimes means that the weather hasn’t yet turned to the season the items are intended for, Kishi-san convinced me that there is a value to discipline of adhering to the calendar in any event.

According to Kishi-san the “red room”–the largest in the house–was particularly unique for Kanazawa, because it had garden views in two directions–both to the little pocket garden in the front of the house and toward the main garden in the back.  The high ceilings, large tokonoma alcove with its outsized ikebana arrangement, and carved transoms all contributed to creating a striking atmosphere.  I can well imagine diners relaxing and enjoying a kaiseki meal in this room. 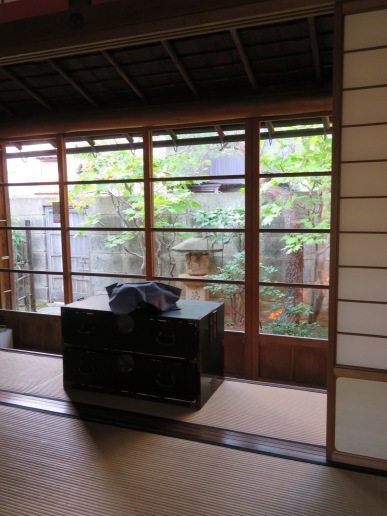 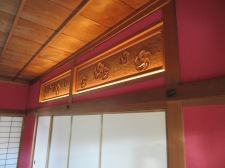 The “blue room” was also impressive, with another large, seasonal ikebana arrangement and some Buddhist statuary.  The central figure of the statue was, I believe, Enma, the god of hell, who judges whether people should go to heaven or hell.  My Judeo-Christian sensibilities tell me I would feel the need to be careful not to over-indulge while sitting in this room under his watchful eye.  Perhaps Japanese guests view Enma’s presence differently.

Another interesting feature in these rooms were the “nail covers”, small metal figures in the shape of a dragon, used to cover nail holes in the wood of the door frames. Kishi-san explained that they were specially made for this house by a local artisan.  Many upper class houses feature nail covers that are custom made for the house, usually evoking some symbol of the family who built the house, but I had never seen any quite as unique as these.

To my surprise, there were also upstairs rooms in use by the restaurant.  The so-called “keep” (tenshu-no-ma) overlooked the garden and the river and was furnished to function as a coffee shop in the afternoons and a bar in the evenings.  Kishi-san and I sat there and chatted for a while, discovering that we have a number of interests in common.  It was wonderful to make a new friend, especially in such a delightful environment. 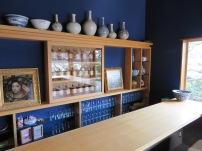 For a final treat, Kishi-san let me walk through the garden, where he and a gardener had been working when I first called up to him.  I’ll bet restaurant guests don’t get to do that!  Kishi-san explained various features of the garden, including the stone pagoda and lantern that his grandfather had acquired and installed decades ago.  The placid river flowed below. 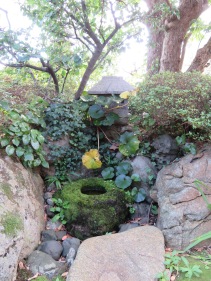 I eventually made it to Higashi Chaya, which is a very interesting neighborhood, but my time at Mon with Kishi-san was definitely the highlight of my day. I look forward to our continued friendship.

Alas, my itinerary didn’t allow me to return to dine at Mon later, but it’s on my must-do list for my next visit to Kanazawa.  I see that it has excellent Trip Advisor reviews and English speaking management/staff.

Like many who visit Kanazawa, I have fallen in love.  The history, culture and respect for heritage are all factors influencing my affection. And now, I can boast a friend who lives there as well.  (Thanks, Kishi-san!)

Side note:  I wrote an overview article about sightseeing in Kanazawa a few years ago that is still current.  I plan to write more on this destination soon.