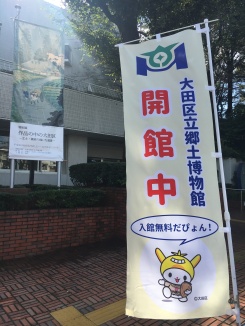 There are so many wonderful museums across Tokyo and across Japan.  Sometimes one finds the greatest treasures in the smallest of them.

The current special exhibit at the Ota Folk Museum, “Ota-ku in art: scenes portrayed by writers and artists“,  is one such treasure.

The exhibit, on the second floor of the museum, features woodblock prints and other works of art depicting various scenes across Ota Ward, created throughout the 19th century and into the 20th century and displayed in roughly chronological order.

In the first few displays are sets of prints of scenes along a section of the Tokaido Road, from the Tama River ferry crossing at Rokugo north through what later became Ota Ward.  Perhaps one of the most striking scenes is a three panel print of a temporary pontoon bridge spanning the river to enable the entourage of the Emperor Meiji when he officially moved from Kyoto to Edo in 1868 and caused the city to be renamed Tokyo. 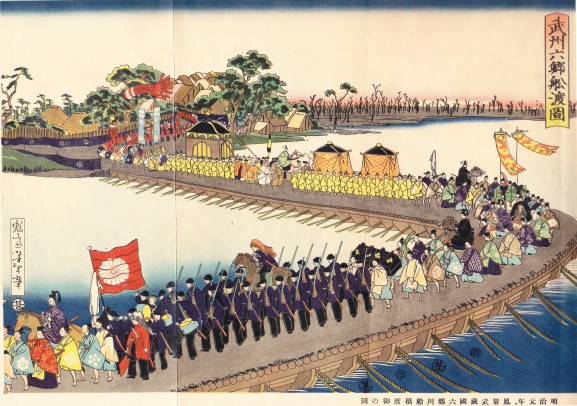 As well as several prints featuring the Rokugo ferry, there were also other scenes along the Tama River as well as of the Yaguchi ferry crossing, a bit further upstream.  Many of these river scenes also depict Mt. Fuji in the background.  One from the Meiji period showing the Rokugo ferry and river traffic, as well as a steam train going across the new trestle bridge, is particularly interesting.  Nearby is a vintage photograph of nearly the same scene.

The impact of travelers on the Tokaido is not to be underestimated.  Locals along the road provide food and shelter to travelers and pedal other wares to them as well.   This, too, found its way into the art of the day.  The stretch of the Tokaido passing through modern Ota Ward–between the post towns of Shinagawa and Kawasaki–was then known as Omori.  A local handicraft of the area, known as Mugiwara Zaiku (Omori straw work), was apparently a particularly popular souvenir.  Prints showing its production and sale are both included in the exhibit.  Among the most interesting prints are those produced by a collaboration between Hiroshige, who specialized in landscapes, and Toyokuni III, who was better at depicting people.  They are almost two prints in one. 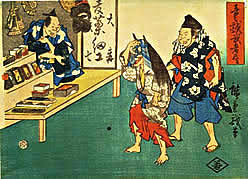 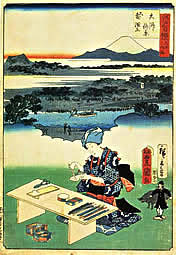 Focussing on travel and travelers as it does, this section of the exhibit also contains several books of black and white prints of various scenes across old Edo, some dating to the 1830s.  Think of them as early versions of traveler’s guide books.  In the exhibit, these are interspersed with single panel color prints, including several by Hiroshige.

While Hiroshige is perhaps best known for his print series on the 53 stages of the Tokaido, he also produced a series of One Hundred Famous Views of Edo that included some places in Ota Ward.  None of these are easily recognizable today: the view from on board the Rokugo ferry, the famed pine tree at Hakkei-zaka (the site of present day Omori Station) and Senzoku-ike pond. 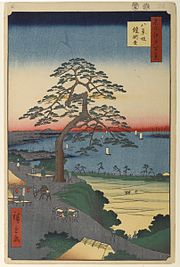 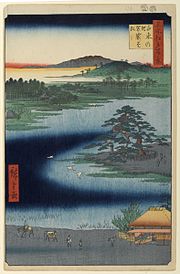 Another striking image of the area around Senzoku-ike is an 1861 drawing of the approach to the Hachiman Shrine that sits above the pond.  This was done by a member of the Prussian Expedition to East Asia, which spent almost 9 months in Japan recording various impressions.  Compare this drawing to a photo I took just last month. 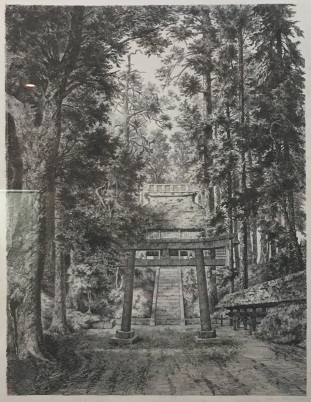 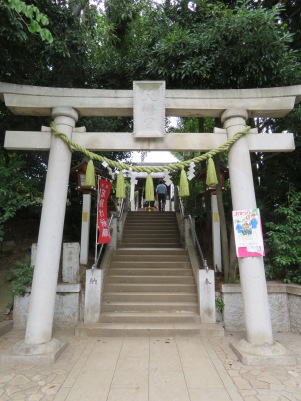 Ikegami Honmonji temple is a major religious site, and a major destination in Ota Ward.  Needless to say, this also makes it a popular subject for artists, and the exhibit features a number of different views of the temple.  Unusually, many of these prints were produced in the 1930s, although some older prints, as well as another drawing from the Prussian Expedition are also included in the exhibit. 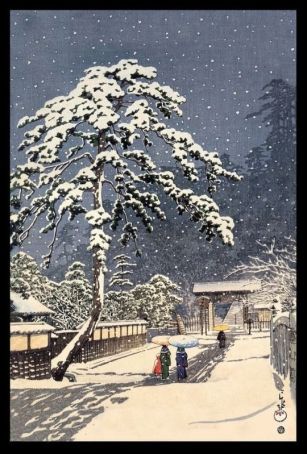 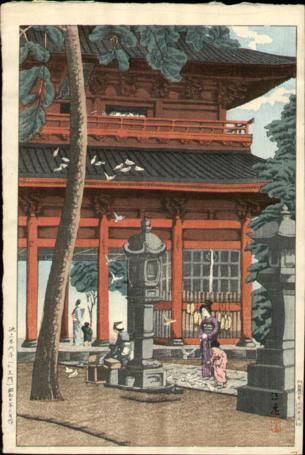 Scenes of everyday life in the Magome area of Ota Ward are also included in the exhibit.  Many capture views that can no longer be found.  Sometimes, as in the case of this rural scene, the curve of the road and shrine in the far distance still exist, while everything else has changed. 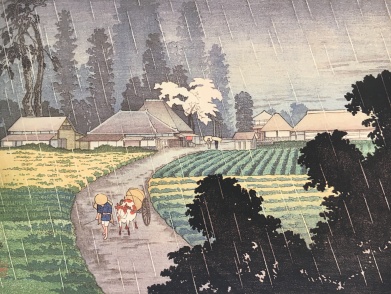 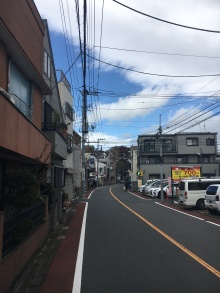 The coastal area of Ota Ward, much of which has now disappeared under land reclamation, was once a major center for the production of nori seaweed sheets.  This activity, in both its 19th and 20th century iterations, was also captured by artists of the day. 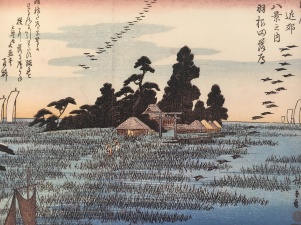 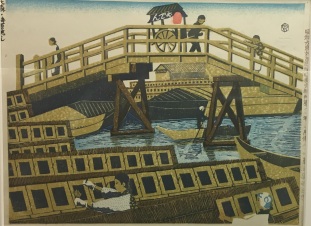 In the first few decades of the 20th century, the Magome area of Ota Ward was still relatively pastoral and picturesque, making it popular with many writers of the period.  Some boarded with local farmers–a cheap way to live while cranking out that first novel or waiting to be published–while others bought their own homes here, and promoted the area’s virtues to their fellow writers.  The museum boasts an entire section on the third floor dedicated to the literati of Magome, but even the special exhibit has displays about the artists and writers who chose to make their homes in this area.  Look for a 1920s oil painting of a village in a dell, with poppies in the foreground.  Next to it is a photo of the artist, Fukube Ryoei and his family with the same scene behind them.

Perhaps part of the popularity of the area was due to the arrival of the train, making it more easily accessible from the heart of Tokyo.  In the 1920s and 30s, the area around Omori station saw a particular boom.  One display shows a 1928 print of the stairs leading from Omori station to the top of Hakkei-zaka, together with some vintage photos of the same area.  Those stairs continue to see a lot of foot traffic today. 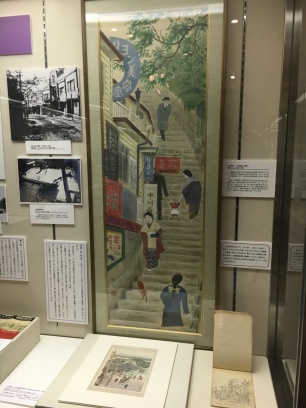 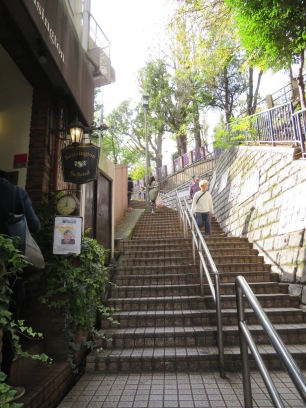 The last images in this special exhibit are of the area around what is now Haneda airport.  Although much of the airport sits on reclaimed land, many fishermen had huts on the higher ground in the past. Anamori Shrine, a guardian shrine for fishermen, also once occupied part of the airport site.  The shrine had to be moved to make room for the airport but its large torii still guards the airport. 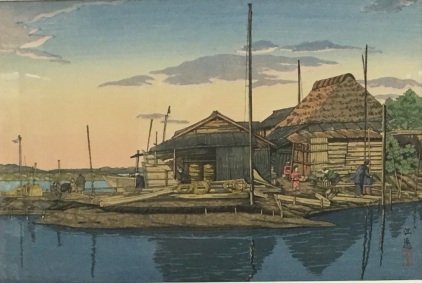 Also on the second floor of the museum is a room with a map of Ota Ward embedded in the floor.  Displays here feature Ota’s water history–in particular, the Rokugo Canal (see my earlier post highlighting a segment of the canal)–and its festivals.  Nearby is a display case sponsored/curated by the Friends of the Museum.  The exhibits are changed regularly; just now they are festival masks. 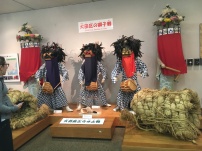 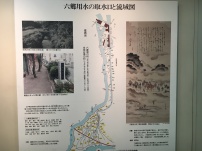 The third floor of the museum contains permanent exhibits relating to the ward’s products and history.  Other than a small English brochure you can pick up on entering the museum, English explanations are very limited.  Nonetheless, the displays are  interesting and instructive even without much detailed information.  (As a Cool Ota-ku Ambassador, I will be collaborating with the museum to improve their English signage.)

The first room covers the lives and work of the Magome literati mentioned earlier. Next are displays of an ordinary home a century ago–apparently often used to give school children a hands-on experience of those by-gone days.  Displays on cloth dying and nori seaweed sheet production follow. 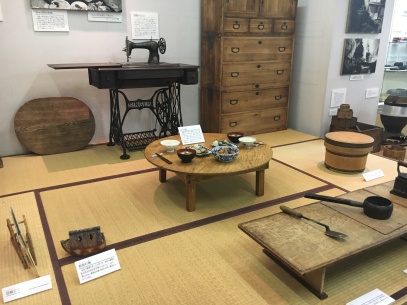 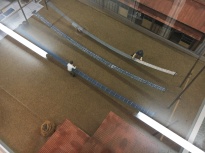 There is also an exhibit on Omori’s famous Mugiwara Zaiku straw work, including a cute diorama of a specialty shop serving customers in the Edo period. 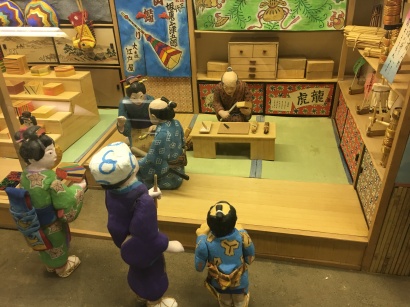 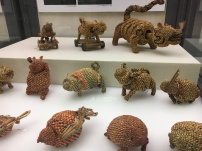 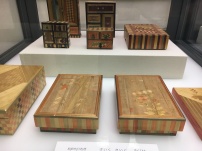 The last major display features Haneda airport, documenting its history and growth since 1931.  Check out the airport’s expanding footprint shown across the top of the chronology photo below. 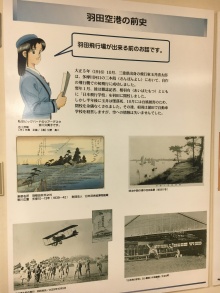 The Ota Folk Museum is just a seven minute walk from Nishi Magome station.  The special exhibit runs through December 24, 2018.  The museum is open from 9 am to 5 pm Tuesday through Sunday (open on Mondays that are public holidays) and is free of charge.  After spending an hour or two at the museum, stroll over to nearby Ikegami Honmonji to compare the prints you’ve just enjoyed with the real thing.

My special thanks to the staff of the Ota Folk Museum for their kind hospitality during my last visit, and especially to Masaka Orie-san for enlightening me on so many aspects of the special exhibit, many of which I have shared above.

One thought on “Ota-ku in art: scenes portrayed by writers and artists”