The moon is full, the night is balmy, and you just wanna kick up your heels and dance!  Maybe that sentiment explains the origins of the Anamori Inari Lantern Festival taking place this weekend at Anamori Inari Shrine near Haneda Airport.

There is still time to join the Saturday night portion of the festival, or the flea market that follows on Sunday morning.  This is a small festival put on by the local community.  While there are plenty of participants, it’s not thronged with people, making it perhaps more fun than many better-known events.

The festivities get underway just after 6 pm, as the sun is setting and light is fading.  Hundreds of lanterns–box frames covered with paper and hanging on special racks to create a wall of soft light–are lit, one by one, to create a festive atmosphere.  Jazzy music plays in the background.

Wait a minute! What? Jazzy music?

One aspect of Japanese festivals that is always interesting is the involvement of the younger generation, a way to ensure that the festival will continue after the older generation is gone.  So yes, jazzy music is playing as a group of girls from a local dance school show us their moves on the shrine’s kagura-den dance stage. 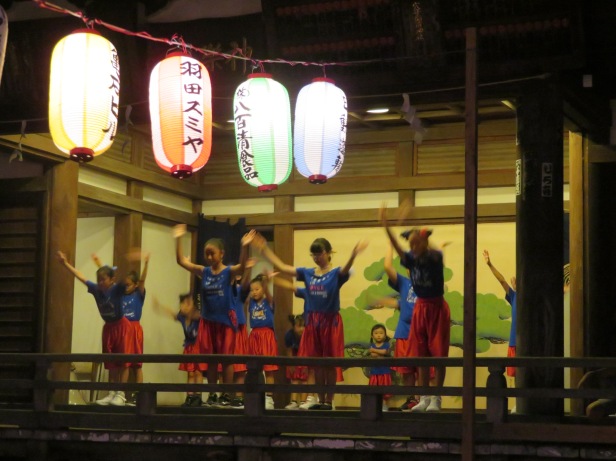 But these girls are just the warm-up show, something to entertain us while the lanterns are being lit and the crowd is gathering.

This is a participatory festival.  As I walked through the torii and onto the shrine grounds, a young mother with a toddler clinging to her knees greeted me in English and offered me a candle: “Would you like to light a lantern?” Another volunteer is helping others light their candles and insert them into the lantern through a small “door” on one side.

With some assistance from the keeper of the flame, I light my candle and manage to get it inside the lantern without it going out or starting a bigger fire.   There is an aluminum cup–to catch the dripping wax–through which a nail protrudes.  My candle has a hollow spot on the bottom that easily slides over the nail.  I have lit a lantern!

The lanterns, I’m told, are made by volunteers and funded by donations.  Each has some sort of picture or drawing on the front–most hand-drawn by local school children or clubs–with the name of the donor written on the left-hand panel and the particular prayer or wish written on the right-hand panel.

The prayers range from business success and safe building construction, to health and longevity.  Anamori Inari Shrine has a history of protecting and looking after travellers and locals and these prayers all fit that.

People have drawn whatever they wanted on their lantern covers.  Images from traditional Japanese folk tales and beliefs are one common theme. 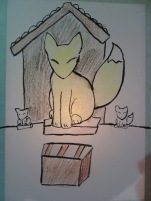 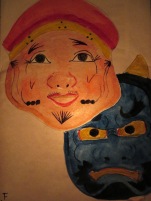 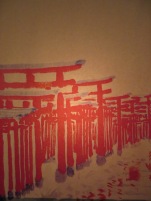 Sports is another, and I’m pleased to see both male and female athletes depicted. 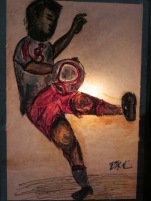 Ukiyoe and other traditional art is another popular theme.

Throughout the evening’s festivities, people wander the shrine grounds admiring the various lanterns.

And what would a festival be without food?  Local volunteers have set up stands dispensing kara-age fried chicken, freshly grilled yaki-soba, beer and chu-hi, all priced at just one or two hundred yen.  At those prices, they weren’t out to make a profit.  But they were clearly having a good time! 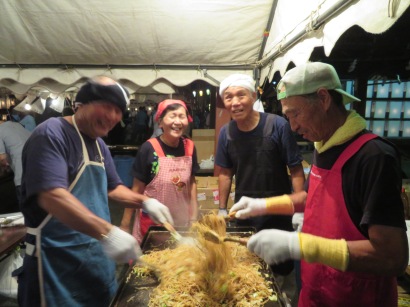 The lanterns are interesting and beautiful.  There is something about a softly flickering flame illuminating the darkness (even when it’s behind colored paper) that is both comforting and soothing.  But at this festival, we’re also dancing.

In the traditional fashion, strings of paper “chochin” lanterns extend from a central platform holding a drum.  The drummer strikes a beat, then another. Her fellow percussionist adds a syncopated descant by striking a small brass cup (kind of a cross between a cow bell and a cymbal). They are accompanying a recording of a traditional folk song, but it is their beat that makes this dancing music.

A line of ladies in indigo and white cotton yukatas emerge from behind the kagura-den and proceed to encircle the drum platform, their hands and feet moving in time with motions that carry symbolism I can only guess at.  This is Japanese line dancing at its best.

To my astonishment, the dance moves change with each new song that is played.  And everyone seems to know all the moves!  Of course, the initial dancers are members of groups or clubs and have probably been practicing for weeks, if not doing these dances for years.

As the evening progresses, more and more people, young and old, join in the dancing, some in yukata and others in everyday Western dress.  Some of the girls who had earlier been jazz dancing on stage are among them.  Many participants don’t know the steps and have to just follow the others as best they can.  I hear one women exclaim, “The music stopped just as I was getting the hang of it!”.  I can sympathize. 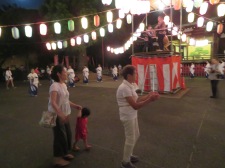 Toward the end of the evening, shrine personnel also demonstrate their dancing prowess with a traditional kagura dance to pre-recorded Heian period music. 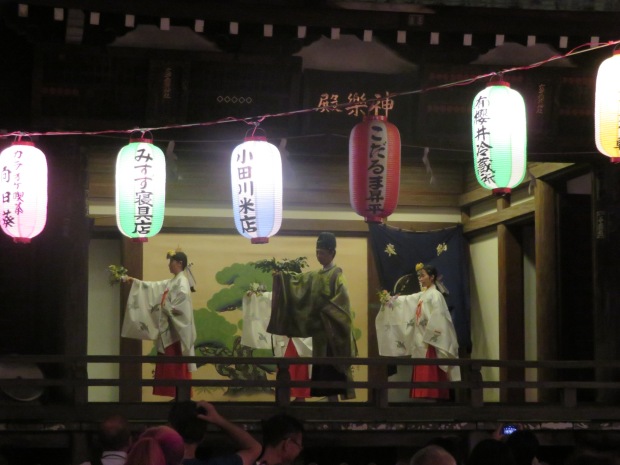 Then we have one final dance and the end of the evening is announced. 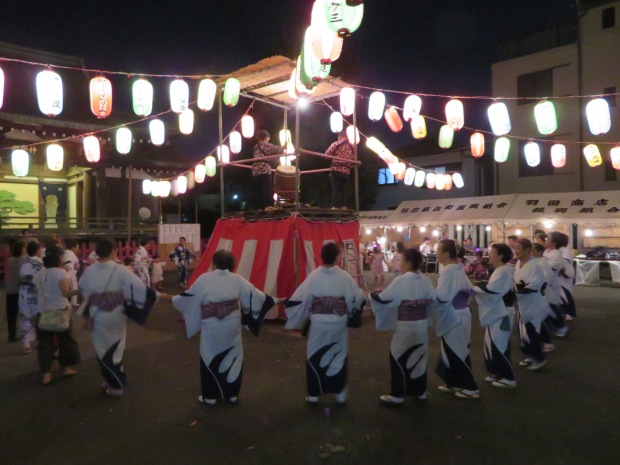 The dancing under the moon—and its paper lanterns effigy—has finished…for now.  But this is a two-day annual festival–always the last weekend of August.  I think I’ll mark my calendar now to make sure I don’t miss it next year. 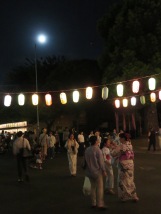 Anamori Inari Shrine is just a few minutes’ walk from Anamori-inari Station on the Keikyu line bound for Haneda Airport.

4 thoughts on “Lanterns and dancing: the Anamori Inari Lantern Festival”