As the season of new beginnings, Spring is the season when bamboo shoots emerge from the earth to shoot their way skyward.  But clever hunters know they can hunt out the little brown spears just as they are breaking the surface for an excellent seasonal treat.

This year, late Spring found us visiting our friend Hiro on his farm in Shizuoka, where we could join him for a little bamboo shooting.  While probably not essential, we made a fairly early start, leaving the house about 7:30 am, outfitted with hats and sturdy shoes, gloves and picks in hand.

Hiro’s “farm” is comprised of several disconnected tracts of land: three rice paddies here, a bit of tea there, and high up the small mountain at the back of his village, a tract of land given over to bamboo forest.  It was about a 15 minute walk from Hiro’s house, but we made a few stops to greet various of his neighbors along the way.  Village life is so friendly (but that’s a story for another day).

The last several minutes of our “walk” was actually a very steep climb to reach Hiro’s land.

Hiro pointed to a few potholes and commented that inoshishi (Japanese wild pigs) also like bamboo shoots this time of year.  From his description of how aggressive these creatures can be, we counted ourselves lucky that they are largely nocturnal.

Then his eagle eyes spotted some likely candidates for bamboo shooting and our hunting lesson began.  Hiro explained that we were looking for shoots just emerging from the ground.  Too big, like the one on the left below, and they would be no good for eating. 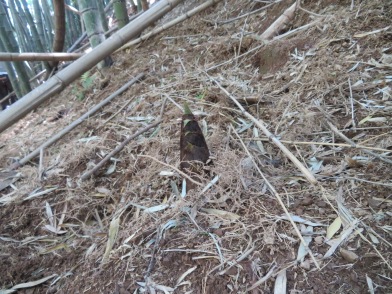 The first task was to dig down around the shoot.  As I discovered, swinging a pick is hard enough, but it’s even harder when you’re standing on a steep slope and easily sent off balance.  The idea is to dig out around the shoot until you find the “root”, where the shoot is coming off the rhizome of the parent bamboo.  It’s not a quick job; I had soon worked up a sweat. 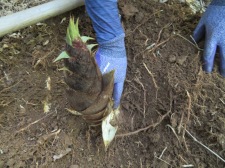 Once that spot in the root system is located, one quick swing of the pick separates the shoot from the parent plant and, voila, lunch!  Okay, it’s not quite that easy.  There’s actually a lot of work to be done even once the bamboo shoots have been harvested.

First, Hiro asked me to fill in the holes made by removing the bamboo shots.  Otherwise they fill with water and become mosquito nurseries.  Hiro is careful to care for his stand of bamboo, using our bamboo shooting as a way of culling and keeping the forest from choking itself.  Needless to say, this kind of land management is important to long-term sustainability.

Next, we gave our harvest an initial clean, brushing away any excess dirt and husking  away the rough exterior leaves. 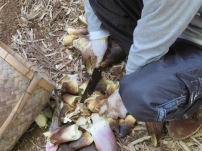 There was no need for a complete clean at this stage, just clear away the detritus.  Leaving this behind on the mountain served two purposes, it lightened the load to be carried down the mountain, but it also provided organic mulch for the forest floor. 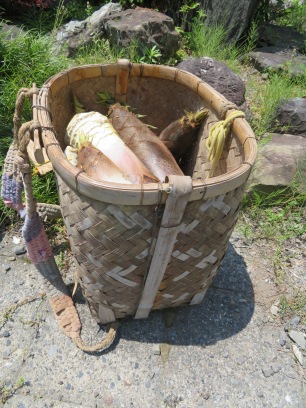 After returning to Hiro’s house, the harvest was given a further clean, removing all the brown exterior leaves to reveal just the white tender shoots.  (If you’ve ever wondered why a Japanese farmhouse has a sink in the backyard, now you know.)

Freshly harvested shoots like this can be eaten immediately–we grilled some with our afternoon backyard barbecue–but if you’re keeping them, or planning to use them in any kind of prepared dish, they need to be boiled with some rice bran (nukane) to remove the bitterness.  Fortunately, Hiro had just polished some of the rice he harvested last fall, so he had plenty of rice bran on hand and soon had a big pot of shoots on the boil. 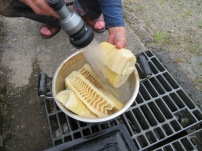 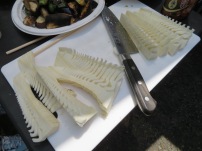 The shoots need to boil with the nukane for about two hours.  Then the rice bran needs to be rinsed off them and they’re ready to use!  Or pack them into a plastic bag with a bit of water and store in the fridge for a few days.  Hiro sent me home with some shoots ready to eat and some in need of boiling.  While they boiled, I explore the Internet for recipe ideas and later made takenoko gohan (bamboo shoot rice) for dinner.

Between hunting for bamboo shoots on the mountainside and hunting for good recipes on the Internet, I suddenly find myself getting into hunting.

One thought on “Bamboo Shooting: the Spring hunting season”