Every two years, in odd-numbered years, Tokyo sees one of the three largest festivals in Japan, the Kanda Matsuri of Kanda Myojin Shrine.  This year, the biggest, most spectacular part of the festival is this week-end:  May 11 and 12.  Saturday, May 11 is the main procession, when Kanda Myojin’s o-mikoshi, portable shrines, are paraded throughout the major neighborhoods of old Edo and on Sunday, May 12, o-mikoshi from  108 local neighborhood shrines are paraded through their neighborhoods and on to Kanda Myojin for a grand finale.

O-mikoshi, while regarded as portable, are in fact quite substantial and heavy and carrying them through the streets requires lots of participants.  But it is an essential part of shrine-related festivals, as the gods themselves are said to be transported in the o-mikoshi, effectively allowing the gods to make “house calls” throughout their jurisdiction.

Kanda Myojin is one of Tokyo’s largest and most venerable shrines.  Founded in 730, the shrine was originally located in the area that is now Tokyo’s Otemachi district, not far from the east garden of the Imperial Palace.  The shrine was moved in 1603 on orders from Tokugawa Ieyasu, the first Tokugawa shogun.  Ieyasu was also the man who initiated the Kanda Matsuri in 1600, ostensibly as a celebration of his victory in the Battle of Sekigahara, the battle which enabled him to unify the nation and become shogun.

On the evening of May 9, I went along to witness the Horen Mikoshi Senzasai, the ritual transferring the gods of Kanda Myojin from the main shrine (honden) to their respective o-mikoshi. The lighting of the shrine lent an air of drama to the evening. 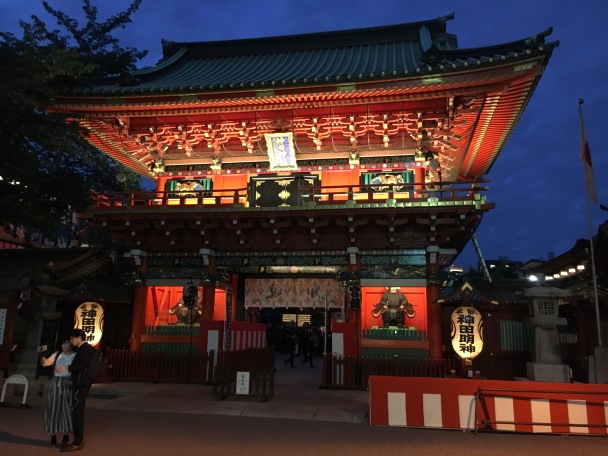 A small crowd gathered in the central courtyard, although the area immediately in front of the honden was kept clear to facilitate the ceremony.  As the twilight deepened and under the tiny light of a thin sliver of waxing crescent moon, a number of priests and acolytes paraded in from one side and made their way into the honden. 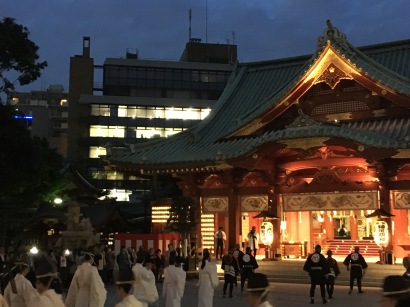 After a number of prayers, purification rituals and offerings, the doors behind the altar, leading to the shrine’s innermost sanctuary, were opened.  Then a white cloth screen was carried in, shielding the inside of the shrine from view, presumably because the gods were being made ready to emerge.  The lights inside the shrine went out.

When all was in readiness, several acolytes assembled in the courtyard, together with two women carrying torches.  Then the priests began to file out of the honden, some carrying fronds of sacred tree, which they waved through the air as they walked.  After several had emerged, the white cloth screen, now folded into a square, was carried out.  The gods were being carried inside.  In front of the squared screen, small squares of paper were strewn to purify the route. 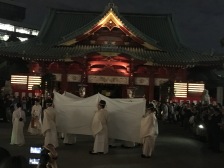 The procession of priests made their way to the area behind the honden, where the o-mikoshi were stored.  Once there, the priests began a new ritual to transfer the gods into the o-mikoshi, where they will remain until transferred back to the honden on the last day of the festival.  When the rites were completed, various offerings were placed in front of the o-mikoshi, perhaps to help the gods become comfortable in their new, temporary surroundings. 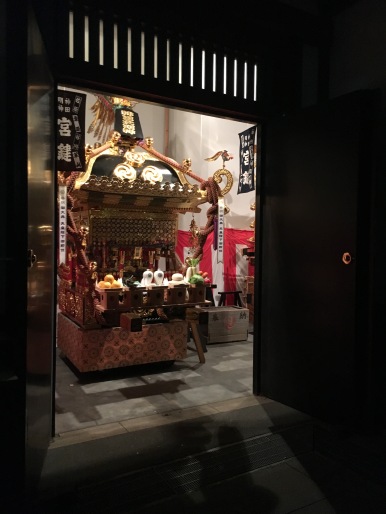 Kanda Myojin has three main o-mikoshi, one for each of the gods it enshrines, as well as a number of minor o-mikoshi and some large floats.  The three gods of Kanda Myojin are Onamuchi-no-mikoto, Sukunahikona-no-mikoto, and Taira no Masakado.  Onamuchi-no-mikoto is also known as Daikokuten, one of the seven lucky gods, specifically the god of marital bliss.  Sukunahikona-no-mikoto is also known as Ebisu, Daikokuten’s son, and the god of commercial success.  Taira no Masakado was a rebel samurai who lost his head (literally) in 940, and was finally enshrined at Kanda Myojin in order to appease his unhappy spirit.  As a god, he is said to ward off evil.  (Learn more about him here.)

Beginning from 5:00 am on Saturday, May 11, these o-mikoshi and the other floats will all be prepared for the shinkosai (literally, god’s happiness festival), also referred to as the main procession.  The procession begins from 8:00 am and will travel along the city streets in a kind of figure eight pattern, returning to Kanda Myojin by 7:00 pm.

More than a thousand people will participate in the procession, carrying the o-mikoshi, pushing/pulling the floats, riding horses in samurai regalia, or just walking in a happi coat associating them with their particular local shrine.  It will be quite a spectacle. 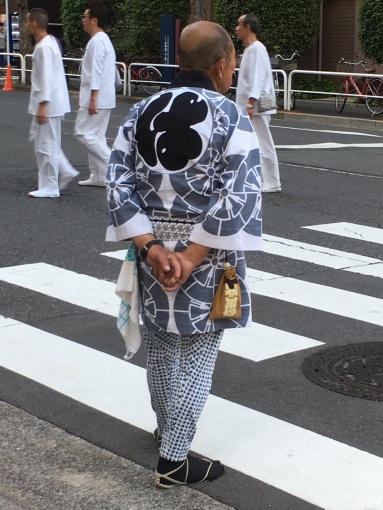 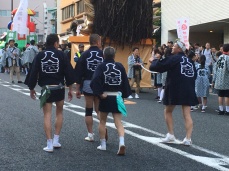 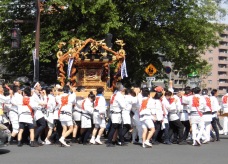 The procession takes place on city streets, in some cases, stopping traffic.  The parade route, shown in broad outline in the map above, is marked out by white paper lanterns and twine with purifying zig-zag papers hanging from it. 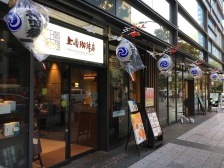 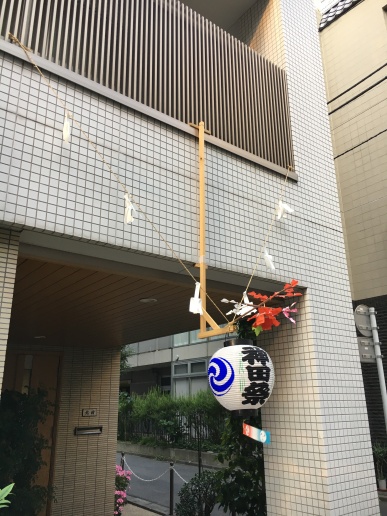 The procession makes some scheduled stops.  The first will be at Masakado no Kubizuka in Otemachi, the original site of Kanda Myojin, where a brief ritual will be performed (remember how important it is to keep Masakado’s spirit happy!).  This should take place sometime between 10:30 and 11:00. 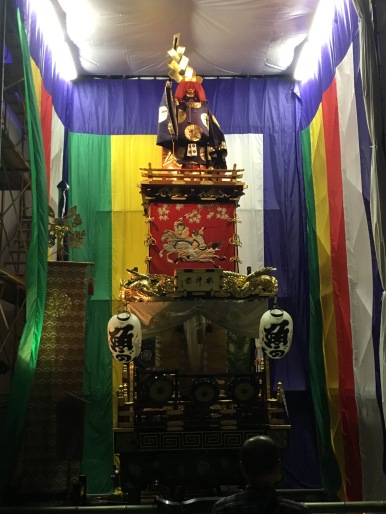 Also starting from Arima Elementary School at 3:00 pm is a “secondary procession” comprised of floats with various literary and contemporary images, such as anime heroes, a nod to the need to modernize to maintain popular support. Kanda Myojin is near to Akihabara and is, apparently, very popular with the “tech” crowd. It has also featured in some popular anime.  This parade will make its way back to Kanda Myojin by 6:00 pm. 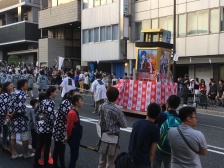 Beginning at 9:00 am on Sunday, May 12, o-mikoshi and local floats will be brought to Kanda Myojin via similar street processions from the 108 subordinate shrines of the area, perhaps returning Saturday’s visits to them by the Kanda Myojin gods in their o-mikoshi.  They won’t all come in at once; there is apparently a schedule for the day, but expect to see thousands of local partipants moving their shrines through the streets.  Even on Saturday the o-mikoshi of these 108 are all in readiness. 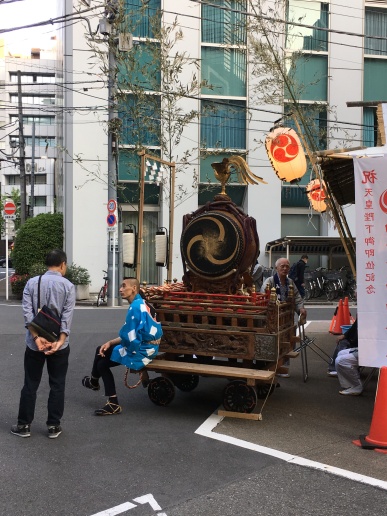 If you can squeeze yourself in, Kanda Myojin itself will be the center of action and the streets nearby may have the best views. 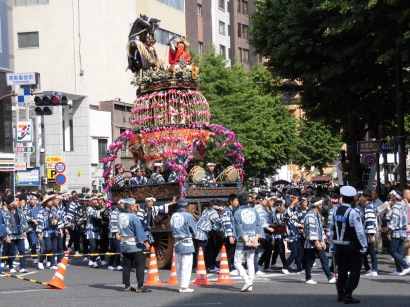 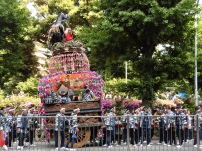 But the festival doesn’t finish when the o-mikoshi processions are done.  On Tuesday, May 14, there will be tea ceremony at 11 am and a Noh performance from 6:00 pm.  And finally on Wednesday, May 15, there will be a ritual to return the gods to the honden (until the same time in 2021).

One thought on “Kanda Matsuri: a major spectacle not to be missed”