Japan has a long history of group dancing, especially during festivals. The dances might be performed during parades or as performances. Often everyone is dressed in the same yukata or kimono.

In 1954, the Shikoku city of Kochi, concerned to boost local morale on the heels of the long struggle of post-war recovery, hit on an idea for a new kind of festival dance. The dance would be based on Japan’s festival dance tradition, but would allow for modern variations, even modern music and different kinds of costumes. They called their dance Yosakoi.

Yosakoi dance had three basic rules: 1) dancers hold naruko clappers, a wooden noise maker historically used by farmers to scare away birds, 2) they should dance while moving forward, and 3) somewhere in their musical selection they needed to incorporate select bars of the Naruko Odori song, a song written by Shikoku native composer Takemasa Eisaku, drawing on elements of traditional folk and children’s songs. Otherwise, the groups are free to be as creative as they like.

And that can get pretty creative! Between the imaginative musical compilations, clever colorful costumes, and fascinating group coordination, Yosakoi dances are highly energetic and entertaining.

Although Kochi city was forced by the pandemic situation to cancel its festival in August 2021, they recently arranged for a special live-streamed event called “Premium Yosakoi in Tokyo” that featured live, live by remote feed, and pre-recorded performances as well as historical dance footage and photos. 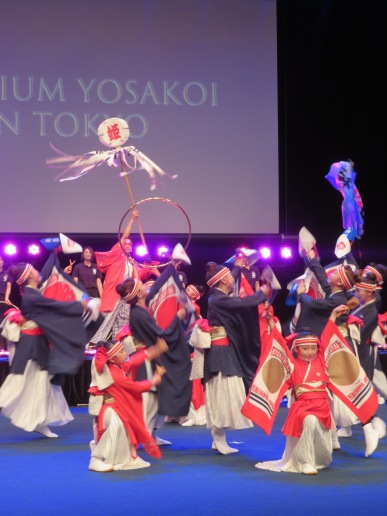 The entire event can be viewed on YouTube. Let me share some more about Yosakoi here as well.

If you ever visit Kochi, even if it’s not at Yosakoi festival time, be sure to visit the Kochi Yosakoi Information Exchange Center, a museum introducing all aspects of Yosakoi. Besides learning the history of the dance and the festival, visitors can attempt a Yosakoi dance for themselves and even make their own customized naruko clappers (costs JPY1,000 and takes less than 15 minutes). 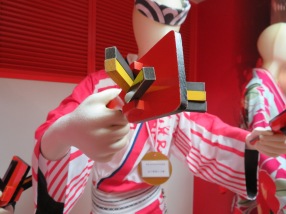 Be sure to ask at the museum whether there are any Yosakoi performances taking place nearby. In Kochi, Yosakoi isn’t just for the annual festival; it is featured during other occasions as well. Last November, when I was in Kochi for an event commemorating 184 years since the birth of Kochi favorite son, Sakamoto Ryoma, several local Yosakoi troupes performed. 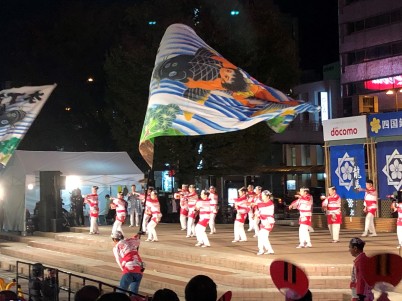 While Yosakoi has its roots in festival parade dancing, and Yosakoi festivals still include parades of dancers (here’s an example), there is also often a performance competition, with the best troupes traveling to Kochi for the ultimate Yosakoi competition at the annual festival (alas, not in 2021!). The entire troupe performs a synchronized dance routine to a musical medley of their choosing, with the exception of including the required bars from the Naruko Odori song. The musical selections range from traditional Japanese folk songs to jazz, pop and even classical.

The dance performances are so full of energy and the synchronized movements are often enhanced by colorful costumes, some with different fronts and backs or quick-change designs, that allow for an even wider range of visual display. (For example, the same dance troupe is depicted in both of the smaller photos below.)

One of the performances at Premium Yosakoi in Tokyo featured costumes that even became part of the stage backdrop.

While watching a video of Yosakoi is entertaining, there is nothing to compare with the real thing. Although Kochi cannot hold its August festival in 2021, Dream Yosacoy, a Tokyo-based Yosakoi festival held in Odaiba and in front of Tokyo Station, is scheduled to take place November 5-7, 2021. Don’t miss it!

And if you’re not in Japan, look around near you. Yosakoi may feature in a Japan-oriented festival in your area. Or consider starting your own Yosakoi dance troupe!